The ride was originally planned to open with the park in 1992. The ride was then canceled until 1993 when the ride was announced to open in 1996 to be called "The Wacky Twister". When Fiesta Texas in San Antonio, Texas was bought out from Time Warner in 1996 (the owner of Six Flags at the time), they helped rebrand the park into Six Flags Fiesta Texas. Time Warner saw the opportunity to advertise and promote their latest movies through their Six Flags parks, so they added The Joker's Revenge, the first Vekoma Hurricane roller coaster in the United States and the first Vekoma roller coaster to run backwards a full circuit. It would be placed towards the back of the park in the Fiesta Bay Boardwalk section next to the quarry wall.

Construction of Joker's Revenge began in late 1995 and was completed in April 1996. On May 10, 1996, the ride officially made its debut. It was the park's first roller coaster to be themed to a DC Comics character and feature inversions. During the opening week, park employees were dressed in yellow jackets and green colored hair. One defining feature of the ride was its funhouse queue line, which featured flashing lights and upside down furniture. It had magenta track, magenta supports and light yellow trains manufactured by Arrow Dynamics.

While it was one of the best rides at Fiesta Texas when it opened in 1996, Joker's Revenge would not fare well by the early 2000s as guests would complain about how rough the ride experience had become. Plus, the ride was facing mechanical issues. The coaster was closed down in 2001 and did not operate at all during the 2002 season. Then in late 2002, it was dismantled and moved to Six Flags New Orleans. The funhouse queue line was reused for the park's Brutal Planet Haunted House during Fright Fest that year. 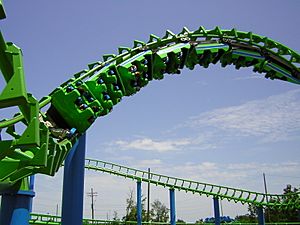 One of The Jester's trains going through a corkscrew

Six Flags took over the lease of Jazzland in 2002, operating it as "Jazzland" for the 2002 season, changing the park's name in 2003 to Six Flags New Orleans for the 2003 season. Before the 2003 season, the park opened a whole new selection of rides including moving The Joker's Revenge roller coaster from Fiesta Texas in San Antonio to the park in New Orleans and renamed it The Jester in the Mardi Gras section of the park. The coaster, which still ran backwards, was given a new color scheme of Green and Blue.

When Hurricane Katrina hit the park on August 29, 2005, the park was severely flooded, causing Six Flags New Orleans to permanently shut down. It is now owned by the city of New Orleans. 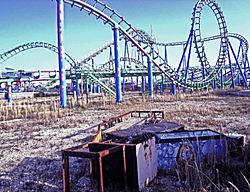 In 2007 Six Flags began the process of moving rides from the park to their other properties. While Batman: The Ride, Bayou Blaster, Sonic Slam and Road Runner Express had all been moved by 2009, The Jester still stands abandoned at the New Orleans park, along with Mega Zeph and other coasters and attractions. Some of the Jester's green and blue paint is peeling away, revealing the old Joker's purple paint scheme.

Once riders would board one of the Jester's two trains, a train would then take riders up a 79-foot (24 m) tall lift hill. After the train went up the lift hill, it would then loop around and drop at speeds up to 40 miles per hour (64 km/h) through a 58-foot (18 m) vertical loop and then the train would loop around over the station to the ride's 24-foot (7.3 m) double corkscrew. Once the train passed the double corkscrews it would then take riders through a double helix's before entering the brake run that took rides back to the station. There are two Vekoma Hurricane's in the world and The Jester was the only one to take riders backwards throughout the whole course of the coaster. The other Vekoma Hurricane is located at Walygator Parc as The Comet that only travel riders forwards and not backwards.

All content from Kiddle encyclopedia articles (including the article images and facts) can be freely used under Attribution-ShareAlike license, unless stated otherwise. Cite this article:
The Jester (roller coaster) Facts for Kids. Kiddle Encyclopedia.