The Smith and the Devil facts for kids 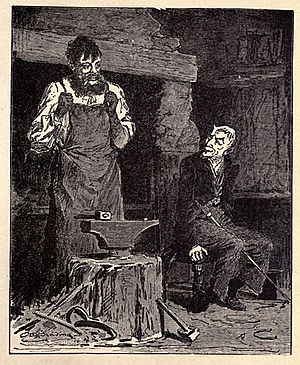 Illustration for the folk tale The Smith and the Devil, ink drawing, 1916

The Smith and the Devil is a European fairy tale. The story is of a smith who makes a pact with a malevolent being—commonly the Devil (in later times), Death, a demon or a genie—selling his soul for some power, then tricks the devil out of his prize. In one version, the smith gains the power to weld any material, he then uses this power to stick the devil to an immovable object, allowing the smith to renege on the bargain.

The tale was collected by Giambattista Basile in Lo cunto de li cunti of 1634, then the Brothers Grimm in their Children's and Household Tales (published in two volumes in 1812 and 1815), although they removed it in editions of 1822 and later, substituting "Brother Lustig" and relegating references to it to the notes for "Gambling Hansel", a very similar tale. Edith Hodgetts' 1891 book Tales and Legends from the Land of the Tsar collects a Russian version, while Ruth Manning-Sanders included a Gascon version as "The Blacksmith and the Devil" in her 1970 book A Book of Devils and Demons.. Richard Chase presents a version from the Southern Appalachians, called "Wicked John and the Devil."

According to George Monbiot, the blacksmith is a motif of folklore throughout (and beyond) Europe associated with malevolence (the medieval vision of Hell may draw upon the image the smith at his forge), and several variant tales tell of smiths entering into a pact with the devil to obtain fire and the means of smelting metal.

According to research applying phylogenetic techniques to linguistics by folklorist Sara Graça da Silva and anthropologist Jamie Tehrani, "The Smith and the Devil" may be one of the oldest European folk tales, with the basic plot stable throughout the Indo-European speaking world from India to Scandinavia, possibly being first told in Indo-European 6,000 years ago in the Bronze Age. Folklorist John Lindow, however, notes that a word for "smith" may not have existed in Indo-European, and if so the tale may not be that old.

All content from Kiddle encyclopedia articles (including the article images and facts) can be freely used under Attribution-ShareAlike license, unless stated otherwise. Cite this article:
The Smith and the Devil Facts for Kids. Kiddle Encyclopedia.