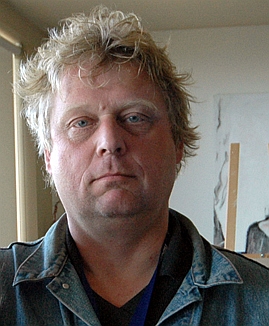 Van Gogh worked with the Somali-born writer and politician Ayaan Hirsi Ali to produce the short movie Submission (2004), which criticized the treatment of women in Islam. The last movie Van Gogh had completed before his death, 06/05, was a fictional exploration of the assassination of Dutch politician Pim Fortuyn.

On 2 November 2004, Van Gogh was murdered by Mohammed Bouyeri, a Dutch-Moroccan Muslim in Amsterdam. He was 47 years old.

All content from Kiddle encyclopedia articles (including the article images and facts) can be freely used under Attribution-ShareAlike license, unless stated otherwise. Cite this article:
Theo van Gogh Facts for Kids. Kiddle Encyclopedia.