Thomas Nelson House is an historic Colonial home in Yorktown, Virginia. It was built around 1730 and held by generations of the Nelson family through the Revolutionary War. After years in private ownership, it was designated as a National Historic Landmark and added to the National Register of Historic Places in 1966.

It was acquired by the National Park Service in 1968 and restored in 1976 to its 18th-century character. It is also a contributing property to Colonial National Historical Park in Yorktown and among the battlefield attractions. 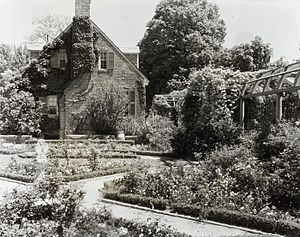 "York Hall," Captain George Preston Blow House, Route 1005 and Main Street, Yorktown; photo by Frances Benjamin Johnston, 1929. Griffin & Wynkoop, architects, made additions to 18th-century brick house after Blow's 1914 purchase. It was the home of Thomas Nelson Jr. (1738-1789), during the Revolutionary War. Landscape: Charles Freeman Gillette, from 1914. Today the house has been restored to its 18th-century character and is designated as a National Historic Landmark. It is operated as National Park Service site.

The house was built by Thomas "Scotch Tom" Nelson around 1730, and later occupied by his grandson, Thomas Nelson, Jr. (1738-1789) during the American Revolutionary War. Nelson, Jr was a planter, politician, and later governor of Virginia.

The house was damaged during the siege of Yorktown. It served as a hospital during the Civil War.

In 1914, it was purchased by Captain and Mrs. George P. Blow, who renamed it as "York Hall". They made a number of additions to update the property, which were designed by Griffin & Wynkoop.

All content from Kiddle encyclopedia articles (including the article images and facts) can be freely used under Attribution-ShareAlike license, unless stated otherwise. Cite this article:
Thomas Nelson House (Yorktown, Virginia) Facts for Kids. Kiddle Encyclopedia.