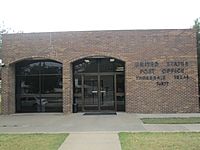 Thorndale is a city in Milam, Texas, with a small part in Williamson. The population was 1,336 at the 2010 census.

Antonio Gómez, a Mexican-American teenager, was lynched on June 19, 1911, in Thorndale following the stabbing of a German-American garage owner, Charles Zieschang. Concerns about prejudice and violence against Mexican-American youths, such as the Gómez hanging, inspired Jovita Idár, to found the League of Mexican Women (La Liga Femenil Mexicanista).

According to the United States Census Bureau, the city has a total area of 1.0 square miles (2.5 km2), all land.

The climate in this area is characterized by hot, humid summers and generally mild to cool winters. According to the Köppen Climate Classification system, Thorndale has a humid subtropical climate, abbreviated "Cfa" on climate maps.

There were 485 households out of which 36.1% had children under the age of 18 living with them, 54.6% were married couples living together, 12.6% had a female householder with no husband present, and 27.0% were non-families. 24.5% of all households were made up of individuals and 13.8% had someone living alone who was 65 years of age or older. The average household size was 2.64 and the average family size was 3.10. 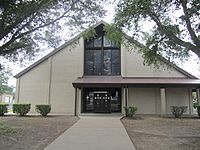 St. Paul Lutheran Church in Thorndale, established in 1891, has a school and a cemetery to the rear of the sanctuary. Its services were originally in German. The current pastor is James K. Mann (2011).

Thorndale (along with Thrall, Taylor, and Round Rock to the west) was where the vast majority of the principal photography and locations for the 2002 movie The Rookie, starring Dennis Quaid, and Rachel Griffiths, were filmed. The Thorndale High School baseball stadium, the downtown main street, and other parts of town were integral to the film, with Thorndale cast as "Big Lake, Texas". Local resident Emanuel Castillo's role in the film was to throw the baseball when Dennis Quaid was on the mound. Other local residents also appeared in the film as extras. Thorndale has also served as location for a number of other films and other productions.

The The Apache Pass Amphitheater and Festival Grounds is located five miles north of Thorndale on Ranch Road 908, just off Ranch Road 486. Apache Pass hosts a number of major events each year., including Christian music festivals and the eastern edition of the Nocturnal Wonderland (formerly known as the Nocturnal Fest), one of the largest electronic music festivals in the United States which found 50,000 musical enthusiasts attending in 2012. Apache Pass also hosts the Annual Texas Trail Riders Convention and Trail Ride and the Annual Silver Spurs Spring Jam, which benefits the SS BEVO Endowment, which has been established to fund the care and expenses of BEVO (the UT Longhorn steer mascot), provides scholarships for UT students and supports the University of Texas Neighborhood Longhorns program. Apache Pass also hosts a number of local events and concerts, and has become a vital part of the Thorndale community and its tradition of the arts, music and film. Apache Pass also has a historical museum dedicated to the Apache nation and the contribution of Native Americans in the history of Texas.

All content from Kiddle encyclopedia articles (including the article images and facts) can be freely used under Attribution-ShareAlike license, unless stated otherwise. Cite this article:
Thorndale, Texas Facts for Kids. Kiddle Encyclopedia.