Thornhill Hall is a ruined medieval manor house on a moated island located in Rectory Park, Thornhill, West Yorkshire, England. The ruins are listed as grade II. and the moat, with the surrounding grounds, is a scheduled monument.

Excavations carried out between 1964 and 1972 proved that there had been two halls on the island, an earlier large 13th-century building with clay-bonded foundation walls, and a later c. 1450 stone H-plan building. The later building showed signs of renovation in the 16th century, when a paved floor, plaster walls and a chimney were added. 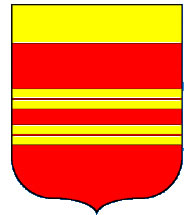 This is the original coat of arms for the Thornhill Family, before they intermarried with the Saviles.

The Saviles later intermarried with the Calverley family, so that when Sir John Savile died in 1503 in Thornhill, he left provision in his will for his sister Alice, who had married Sir William Calverley.

George Savile was created a baronet in 1611. The Saviles remained here until the English Civil War when in 1643 the house was besieged by the forces of Parliament, (having been previously fortified by Sir William Savile, the third baronet of the family). In August 1643 troops of Lady Anne Savile, under Capt. Thos. Paulden defended the hall against the Parliamentary forces under Col. Sir Thos. Fairfax. They were forced to surrender but the hall was accidentally blown up and destroyed. after which the family moved their seat to Rufford Abbey in Nottinghamshire.

Some ruins of the house and the moat still remain at Thornhill Rectory Park. This large house had a secret underground passage, that lead to Thornhill Parish Church. [2] just a few hundred yards away from the park. The passage remained until the early 1990s when it was filled in due to safety reasons.

The Heritage Lottery Fund awarded a grant to the architectural study of the ruins in the summer of 2011.

All content from Kiddle encyclopedia articles (including the article images and facts) can be freely used under Attribution-ShareAlike license, unless stated otherwise. Cite this article:
Thornhill Hall Facts for Kids. Kiddle Encyclopedia.