The Three Counties System is a set of inter-connected limestone solutional cave systems spanning the borders of Cumbria, Lancashire and North Yorkshire in the north of England. The possibility of connecting a number of discrete cave systems in the area to create a single super-system that spans the county borders was first proposed by Dave Brook in 1968, and it was achieved in 2011. The system is currently over 86 kilometres (53 mi) long, making it the longest in the UK and the twenty-ninth longest in the world, and there continues to be scope for considerably extending the system.

The system runs mainly north–south, its western extent being limited by the Craven Fault which truncates the limestone exposure, and the eastern extent where the limestones are conformable overlain by younger rocks. Streams flow from the higher topography from the east and sink into swallet holes at the edge of the limestone. The Three Counties System contains a number of major subterranean streams, all of which combine to resurge at Leck Beck Head above Cowan Bridge. At the northern end, swallets in Barbondale close to the Dent Fault drain south-west through Bull Pot of the Witches, and the water enters the Ease Gill Caverns system in Lancaster Hole; most of Ease Gill Beck to the south drains into the extensive Ease Gill Caverns, although some drains into Link Pot and thus into the bottom of Pippikin Pot; most of Leck Fell drains into the Leck Fell Master Cave, which is part of Lost Johns' Cave, although some drains into Gavel Pot, and some into Notts Pot; Ireby Fell in the south drains into Notts Pot. All these streams eventually reach the phreatic zone where exploration is only possible by cave diving. Some small streams in the south of The Three Counties System are known to resurge at Keld Head in Kingsdale, the next valley to the south.

The system is very complex, with sections formed at different times when the landscape topography and drainage patterns were different from today. Some of the system is believed to pre-date the Anglian glaciation which started at about 478 ka, with one stalagmite in Lancaster Hole being dated to over 350,000 years old, whilst other sections are still being formed today. Waltham has identified five distinct phases of development. The Leck Beck Catchment Area Site of Special Scientific Interest, which is based around the catchment area of the Three Counties System, states in its reason for notification: "The scale and variety of the caves makes this a most important site for the study of surface and underground landform development over a long period of the recent past." It is the interconnections between the sections that are the key to the existence of the super-system. 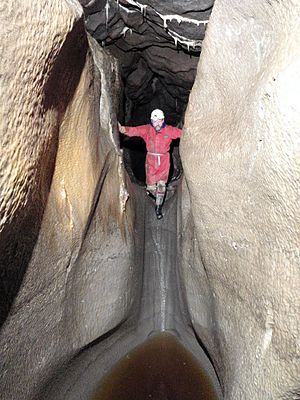 The Three Counties System comprises a number of smaller cave systems, some with multiple entrances. Whether or not a particular cave qualifies as a system in its own right is somewhat arbitrary, and arguments can be made for excluding some and including others. Running broadly from south to north, the systems include:

Most of the individual systems that make up the Three Counties System had been explored to a greater or lesser extent a long time before the possibility of an extended system was mooted. Thus Lost Johns' Cave was explored by the Yorkshire Ramblers' Club in the 1920s, the Ease Gill Caverns System by a number of caving clubs from the time of the original discovery of Lancaster Hole in 1946, and Ireby Fell Cavern in 1949.

The existence for the Three Counties System was first mooted by Dave Brook in 1968, when he proposed that the many fragmented systems stretching from Barbondale in the north to Kingsdale in the south could be part of a much larger system. Over the next 43 years, many discoveries by many cavers gradually knitted the fragments together, but the two most significant dates were 30 May 2010 when Rift Pot was connected to Ireby Fell Cavern, linking systems of North Yorkshire and Lancashire for the first time, and 6 November 2011, when Notts II was linked to Lost Johns' Cave, which was when the northern part of the system (including caves in Cumbria) was connected to the southern part of the system (including caves in Lancashire).

Sixteen cavers have lost their lives in the Three Counties System.

This chronology includes the date of the original explorations of the major systems; the dates when two systems were linked; and deaths that have occurred in the system. 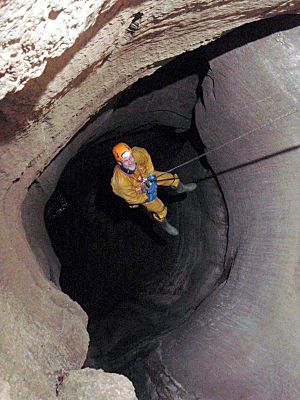 Although Dave Brook's vision for the Three Counties System has come to fruition, there is considerable scope for extending it in both directions. To the north in Barbondale, Aygill Caverns is known to drain into Bull Pot of the Witches, but a route through the underwater passages has yet to be negotiated. This would add 2.5 kilometres (1.6 mi) to the total system. Further north still, a major abandoned route in Aygill Caverns, known as New Year Passage, heads up the Barbondale valley, and may connect with other known caves. To the south, explorations in Large Pot have extended the current system to within 500 metres (1,600 ft) of Kingsdale Beck. Marble Steps, a major active system with large fossil fragments, could well be connected to Rift Pot. Marble Steps, some of Large Pot, and Low Douk Cave are all known to drain to Keld Head – a connection by diving would integrate both the West Kingsdale System (9 kilometres (5.6 mi) long) and the East Kingsdale System (7 kilometres (4.3 mi) long) into the system.

All content from Kiddle encyclopedia articles (including the article images and facts) can be freely used under Attribution-ShareAlike license, unless stated otherwise. Cite this article:
Three Counties System Facts for Kids. Kiddle Encyclopedia.