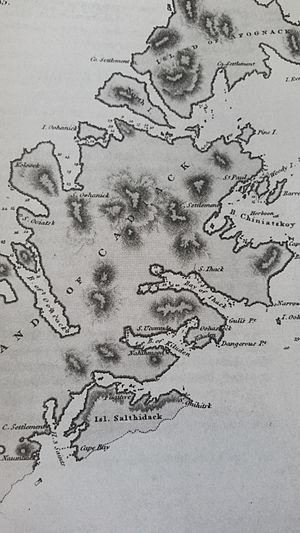 Location of Three Saints Bay and St. Paul on Kodiak in 1805

Three Saints Bay (Russian: Бухта Трёх Святителей, r Bukhta Trëkh Svyatitelyei) is a 9 miles (14 km)-long inlet on the southeast side of Kodiak Island, Alaska, north of Sitkalidak Strait. It is 97 km (60 mi) southwest of Kodiak. The Three Saints Bay Site is an archaeological site, the location of the first Russian settlement in Alaska, Three Saints Harbor (Гавань Трех Святителей, Gavan’ Trekh Svyatitelyei). The settlement was founded in 1784 by Grigory Shelikhov. The main settlement was moved in 1792 to Pavlovskaya Gavan (Павловская гавань – Paul's Harbor), now known as the city of Kodiak. The Three Saints Bay Site was declared a National Historic Landmark by the United States in 1978.

Although Russian fur hunters had established temporary shore stations in Alaska earlier, they intended the Three Saints site to be a permanent colonial settlement. The site was poorly chosen, for the hillside above the shore area was too steep to build on, and the shore area was too small for a substantial settlement. When it was visited in 1790, it was described as a cluster of small structures (probably barabaras), with a population of about fifty men and a small number of women. The site was harmed by subsidence and a probable tsunami in the wake of a 1788 earthquake. In 1791 Alexander Baranov began moving the main Russian settlement to the site of present-day Kodiak.

This original Russian site continued to be occupied as a smaller station of lesser importance until roughly the mid-19th century, at which time it was relocated to a site about 2 kilometres (1.2 mi) away.

Only a few remnants of the Russian occupation remain on the surface. These are mainly pits and rectangular depressions, indications of where structures were located, and some plants that are evidence of the small-scale agriculture which was practiced there. The settlement's cemetery was located to its southeast. Excavation at the site yielded evidence that it was built on the site of an older native settlement, dating to c. 100 BCE.

The Russian settlement site was listed on the United States National Register of Historic Places in 1972, and was designated a National Historic Landmark in 1978.

The same area was later called Lyakhik Bay (Zaliv Lyakhik) by Captain Tebenkov. This was based on its Aleut name Liakik, probably from liak ("black-footed goose").

All content from Kiddle encyclopedia articles (including the article images and facts) can be freely used under Attribution-ShareAlike license, unless stated otherwise. Cite this article:
Three Saints Bay Facts for Kids. Kiddle Encyclopedia.