Thurston Hollow (also known as Thurston Hollow Creek) is a tributary of Moneypenny Creek in Wyoming County, Pennsylvania, in the United States. It is approximately 1.4 miles (2.3 km) long and flows through Eaton Township. The stream's watershed has an area of 1.62 square miles (4.2 km2). Thurston Hollow is not designated as an impaired waterbody. The surficial geology in its vicinity consists of Wisconsinan Till, alluvium, and bedrock. It has one unnamed tributary. 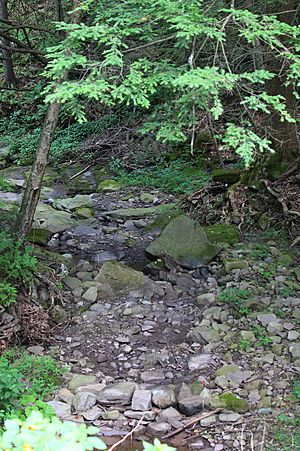 Thurston Hollow begins on the slopes of a ridge in Eaton Township. It flows north-northeast for several tenths of a mile, passing through a pond, receiving an unnamed tributary from the left, and enters a valley. The stream then turns nearly due north for several tenths of a mile and passes through another pond before turning east-northeast. Several hundred feet further downstream, it reaches its confluence with Moneypenny Creek.

Thurston Hollow is not designated as an impaired waterbody.

The watershed of Thurston Hollow has an area of 1.62 square miles (4.2 km2). The stream is entirely within the United States Geological Survey quadrangle of Center Moreland. Its designated use is for aquatic life.

UGI Energy Services, Inc. once applied for a permit to construct, operate, and maintain the Auburn Line Extension Project, a pipeline with a length of 27.4 miles (44.1 km). Such a project would some stream reaches along at least one unnamed tributary to Thurston Hollow.

Farming has been done in the vicinity of Thurston Hollow.

All content from Kiddle encyclopedia articles (including the article images and facts) can be freely used under Attribution-ShareAlike license, unless stated otherwise. Cite this article:
Thurston Hollow Facts for Kids. Kiddle Encyclopedia.