Macrotis is a genus of desert-dwelling marsupial omnivores known as bilbies or rabbit-bandicoots; they are members of the order Peramelemorphia. At the time of European colonisation of Australia, there were two species. The lesser bilby became extinct in the 1950s; the greater bilby survives but remains endangered. It is currently listed as a vulnerable species. It is on average 55 cm (22 in) long, excluding the tail, which is usually around 29 cm (11 in) long. Its fur is usually grey or white, it has a long pointy nose and very long ears, hence earning its nick-name, the rabbit-eared bandicoot. 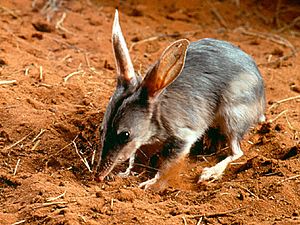 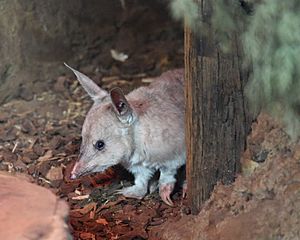 Macrotis means ‘big-eared’ (macro- + ōt- ‘ear’) in Greek, referring to the animal's large, long ears. The genus name was first proposed as a subgeneric classification, which after a century of taxonomic confusion was eventually stabilised as the accepted name in a 1932 revision by Ellis Troughton. In reviewing the systematic arrangement of the genus, Troughton recognised three species names, including one highly variable population with six subspecies.

The term bilby is a loanword from the Yuwaalaraay Aboriginal language of northern New South Wales, meaning long-nosed rat. It is known as dalgite in Western Australia, and the nickname pinkie is sometimes used in South Australia. The Wiradjuri of New South Wales also call it "bilby". Gerard Krefft recorded the name Jacko used by the peoples of the lower Darling in 1864, emended to Jecko in 1866 along with Wuirrapur from the peoples at the lower Murray River.

The placement of the population within taxonomic classification has changed in recent years. Vaughan (1978) and Groves and Flannery (1990) both placed this family within the family Peramelidae. Kirsch et al. (1997) found them to be distinct from the species in Peroryctidae (which is now a subfamily in Peramelidae). McKenna and Bell (1997) also placed it in Peramelidae, but as the sister of Chaeropus in the subfamily Chaeropodinae.

A summary of the treatment as a peramelemorph family is,

Fossil taxa allied to the family are,

Bilbies have the characteristic long bandicoot muzzle and very big ears that radiate heat. They are about 29–55 cm (11–22 in) long. Compared to bandicoots, they have a longer tail, bigger ears, and softer, silky fur. The size of their ears allows them to have better hearing. They are nocturnal omnivores that do not need to drink water, as they obtain their moisture from food, which includes insects and their larvae, seeds, spiders, bulbs, fruit, fungi, and very small animals. Most food is found by digging or scratching in the soil, and using their very long tongues.

Unlike bandicoots, they are excellent burrowers and build extensive tunnel systems with their strong forelimbs and well-developed claws. A bilby typically makes a number of burrows within its home range, up to about a dozen, and moves between them, using them for shelter both from predators and the heat of the day. The female bilby's pouch faces backwards, which prevents the pouch from getting filled with dirt while she is digging.

Bilbies have a gestation of about 12–14 days, one of the shortest among mammals.

The appearance of the bilby has been alluded to as an Australian easter bunny.

Bilbies are slowly becoming endangered because of habitat loss and change, and competition with other animals. There is a national recovery plan being developed for saving them. This program includes captive breeding, monitoring populations, and reestablishing bilbies where they once lived. There have been reasonably successful moves to popularise the bilby as a native alternative to the Easter Bunny by selling chocolate Easter Bilbies (sometimes with a portion of the profits going to bilby protection and research). Reintroduction efforts have begun, with a successful reintroduction into the Arid Recovery Reserve in South Australia in 2000, and a reintroduction into Currawinya National Park in Queensland, where six bilbies were released into a predator-proof enclosure in April 2019.

Successful reintroductions have also occurred on the Peron Peninsula in Western Australia as a part of the Western Shield program, and at other conservation lands, including islands and the Australian Wildlife Conservancy's Scotia and Yookamurra Sanctuaries. There is a highly successful bilby breeding program at Kanyana Wildlife Rehabilitation Centre near Perth, Western Australia.

The bilby lineage extends back 15 million years. In 2014 scientists found part of a 15-million-year-old fossilised jaw of a bilby which had shorter teeth that were probably used for eating forest fruit. Prior to this discovery, the oldest bilby fossil on record was 5 million years old. Modern bilbies have evolved to have long teeth used to dig holes in the desert to eat worms and insects.

It is thought the bilby diverged from its closest relative, an originally-carnivorous bandicoot, 20 million years ago.

All content from Kiddle encyclopedia articles (including the article images and facts) can be freely used under Attribution-ShareAlike license, unless stated otherwise. Cite this article:
Macrotis Facts for Kids. Kiddle Encyclopedia.