There were other protests on Tiananmen square in 1919 and 1976. The protests of 1989 were organised by groups of students, intellectuals and labour activists. There was no common cause or leadership in the protests. However, most protesters did not like the way the Communist party of China ran the economy. Some people also wanted a change towards more democracy. Most people protested on Tianmen Square in Beijing, but some also did in other cities, like Shanghai. The protests in cities other than Beijing stayed peaceful.

On June 4, the government used force to end the protests. This left many people injured or dead. The exact number is not known today. The Chinese government speaks about 200-300 victims, the New York Times says there were between 300 and 800 and the Chinese Red Cross talks about 2,000 - 3,000.

The official Chinese position on the events was that the protests needed to be dispersed in order not to harm the stability of the country.

Tiananmen Square as seen from the Tiananmen Gate in 2004

Many of the scenes were shown around the world over western media (the most famous image is that showing a man standing in front of a file of tanks in the middle of the square).

The protests had various causes. The corruption of the Communist Party was a main issue. The control of the economy was working badly. The country was poor, and city dwellers got the worst of it.

Ironically, this all happened under the rule of Deng Xiaoping. He was Mao Zedong's successor in 1978 and launched the economic reforms. These reforms helped life for farmers and people who lived in the countryside, but was bad for city dwellers. Intellectuals, students, and industrial workers, feared unemployment rising and social problems. They felt disenfranchised. This means people felt they could do nothing about these problems. 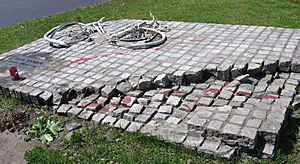 When reformer Hu Yaobang suddenly died of a heart attack on (15 April 1989), students reacted strongly. Hu's death provided the reason for students to gather in large numbers. In university campuses, many posters appeared eulogizing Hu, calling for a revival of Hu's legacy. Within days, most posters were writing about broader political issues, such as freedom of the press, democracy, and corruption.

It is said this was one of the largest specific-purposed, overcrowded demonstrations there has been in all of modern history.

All content from Kiddle encyclopedia articles (including the article images and facts) can be freely used under Attribution-ShareAlike license, unless stated otherwise. Cite this article:
Tiananmen Square protests of 1989 Facts for Kids. Kiddle Encyclopedia.