Erythrina variegata, commonly known as tiger's claw or Indian coral tree, is a species of Erythrina native to the tropical and subtropical regions of eastern Africa, the Indian Subcontinent, northern Australia, and the islands of the Indian Ocean and the western Pacific Ocean east to Fiji. 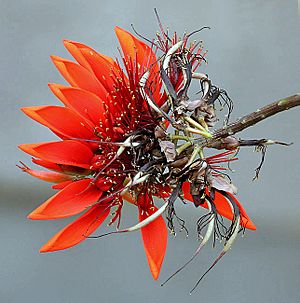 E. variegata is a thorny deciduous tree growing to 27 m (89 ft) tall. The leaves are pinnate with a 20 cm (7.9 in) petiole and three leaflets, each leaflet up to 20 cm (7.9 in) long and broad. It has dense clusters of scarlet or crimson flowers and black seeds.

Erythrina variegata is valued as an ornamental tree. Several cultivars have been selected, including 'Alba' with white flowers.

In Vietnam, the leaves are used to wrap fermented meat (Vietnamese: nem).

E. variegata is often used in agroforestry systems. It can be used for fodder as its foliage has a good nutritive value for most livestock.

The seeds are poisonous in their raw state, but can be cooked and eaten. Along with the bark, the seeds were used to stupefy fish, making them easier to catch.

The Formosan aboriginal tribe, the Puyuma carve a mortar called a ta?ur from the trunk of the tree. It is used for pounding sticky rice that is later to be steamed. 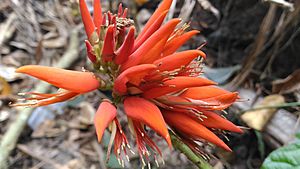 E. variegata was designated the official flower of Okinawa Prefecture in 1967. The deigo flower features in the popular song "Shima Uta" by The Boom, one of the most well-known songs associated with Okinawa. In addition, the use of the wood of the deigo tree is one of the unique characteristics of Ryukyuan lacquerware.

In Sri Lanka, the blossoming flowers of the tree are associated with the advent of the Sri Lankan (April) New Year. The plant is known as Erabadu (Sinhala: එරබදු) in Sinhalese and “ Mulmurukai” in Tamil.

All content from Kiddle encyclopedia articles (including the article images and facts) can be freely used under Attribution-ShareAlike license, unless stated otherwise. Cite this article:
Tiger's claw Facts for Kids. Kiddle Encyclopedia.