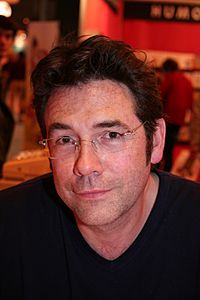 Bernard Verlhac (21 August 1957 – 7 January 2015), better known as Tignous, was a French cartoonist and caricaturist. He was best known for his work on the satirical newspaper Charlie Hebdo. He was born and grew up in Paris.

Tignous was among the victims who were killed in a shooting at Charlie Hebdo's Paris headquarters on 7 January 2015. He was 57.

All content from Kiddle encyclopedia articles (including the article images and facts) can be freely used under Attribution-ShareAlike license, unless stated otherwise. Cite this article:
Tignous Facts for Kids. Kiddle Encyclopedia.