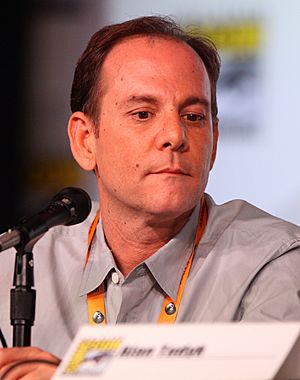 Tim Minear (born October 29, 1963) is an American screenwriter and director. He was born in New York, grew up in Whittier, California. He studied film at California State University, Long Beach.

Minear was an assistant director on the movie Platoon. He wrote episodes for several television series including The X-Files and Lois and Clark. He later wrote, executive-produced, and directed episodes of Strange World, Angel, Firefly, Wonderfalls, and The Inside (which he also created, with Howard Gordon).

Minear had another series, Drive, airing on FOX in April 2007, however it was cancelled by the network after only four episodes. Drive was set to return with two additional episodes on July 4th, 2007, but these were rescheduled to July 13th and then cancelled.

Minear often works with Joss Whedon. His work is usually includes a sharp, black humor. He is known for his ability to create characters who are sympathetic, understandable and completely wrong. The best example of this is his writing in Angel Season Two.

All content from Kiddle encyclopedia articles (including the article images and facts) can be freely used under Attribution-ShareAlike license, unless stated otherwise. Cite this article:
Tim Minear Facts for Kids. Kiddle Encyclopedia.