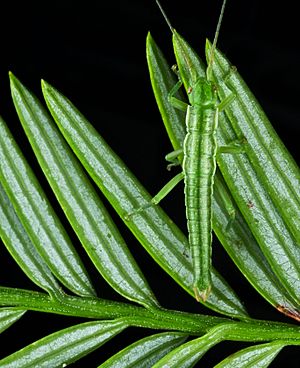 Timema is a genus of short-bodied, somewhat thicker stick insects. They are native to the far western United States.

Five of the 21 species of Timema are parthenogenetic, including two species that have done sexual reproduction for a million years. This is the longest known asexual period for any insect.

Timema sticks are night-feeders: they spend daytime resting on the leaves or bark of the plants they feed on. They are camouflaged. Timema species have colours (green, gray, or brown) and patterns (stripes or dots) which match their background.

All content from Kiddle encyclopedia articles (including the article images and facts) can be freely used under Attribution-ShareAlike license, unless stated otherwise. Cite this article:
Timema Facts for Kids. Kiddle Encyclopedia.