The Tippecanoe Battlefield Park preserves the location of the Battle of Tippecanoe fought on November 7, 1811.

The 16-acre (6.5 ha) site of the battle was deeded to the State of Indiana by John Tipton, a veteran of the fight, on November 7, 1836, the twenty-fifth anniversary of the battle. The site was used for a number of major political rallies during its earlier years, those most significant being on May 29, 1840 in favor of William Henry Harrison's bid for the White House attended by 30,000 people.

The location was attracting visitors by the 1850s, and the battlefield was bordered by the Louisville, New Albany, & Salem Railroad during that decade. A refreshment stand was built adjacent to the site to accommodate visitors, and this land was later purchased by the Northwest Indiana Conference of the Methodist Church and used for the Battle Ground Collegiate Institute and later for a Methodist youth camp. Despite interest in the location for the sesquicentennial of the battle in 1961, the camp was abandoned in 1971 and the location was neglected. It was designated a National Historical Landmark in 1960. It is located in the Battle Ground Historic District.

Local residents acquired the Methodist property upon its closure, and created a museum in the camp's lodge. The citizen's group merged with the Tippecanoe County Historical Association in 1990 which took over operation of the museum. The museum was extensively renovated in 1995.

The Battlefield Monument was ceded to the Tippecanoe County Park Board in 1972. 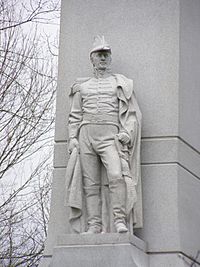 All content from Kiddle encyclopedia articles (including the article images and facts) can be freely used under Attribution-ShareAlike license, unless stated otherwise. Cite this article:
Tippecanoe Battlefield Park Facts for Kids. Kiddle Encyclopedia.