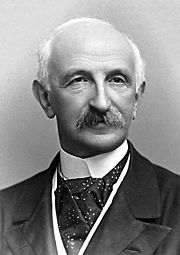 Tobias Michael Carel Asser (April 28, 1838 – July 29, 1913) was a Dutch lawyer and legal scholar of Jewish background. In 1911, he was cowinner (with Alfred Hermann Fried) of the Nobel Peace Prize for his role in the formation of the Permanent Court of Arbitration at the first Hague peace conference (1899).

All content from Kiddle encyclopedia articles (including the article images and facts) can be freely used under Attribution-ShareAlike license, unless stated otherwise. Cite this article:
Tobias Asser Facts for Kids. Kiddle Encyclopedia.