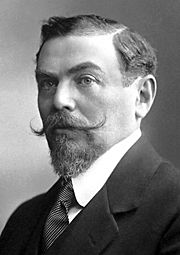 Alfred Hermann Fried (November 11, 1864 – May 5, 1921) was an Austrian Jewish pacifist, publicist, journalist, co-founder of the German peace movement, and winner (with Tobias Asser) of the Nobel Prize for Peace in 1911.

In 1892 he was a co-founder of the German Peace Society (German: Deutsche Friedensgesellschaft). He was one of the fathers of the idea of a modern organisation to assure worldwide peace (the principal idea was fulfilled in the League of Nations and after the Second World War in the United Nations).

Fried was a prominent member of the Esperanto-movement. In 1903 he published the book Lehrbuch der internationalen Hilfssprache Esperanto (Textbook of the International Language of Esperanto). In 1911 he received the Nobel Peace Prize together with Tobias Asser. During the First World War he lived in Switzerland. Fried died in Vienna on May 5, 1921, aged 56.

All content from Kiddle encyclopedia articles (including the article images and facts) can be freely used under Attribution-ShareAlike license, unless stated otherwise. Cite this article:
Alfred Hermann Fried Facts for Kids. Kiddle Encyclopedia.