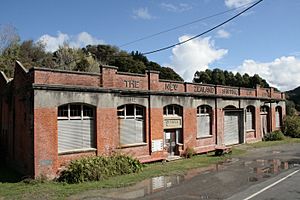 Tokomaru Bay is a small beachside community located on the isolated East Coast of New Zealand's North Island. It is 91 km north of Gisborne, on State Highway 35, and close to Mount Hikurangi. The district was originally known as Toka-a-Namu, which refers to the abundance of sandflies. Over the years the name was altered to Tokomaru Bay.

The seven-kilometre wide bay is small but sheltered, and was a calling place for passenger ships until the early 20th century. Captain Cook spent time here on his 1769 journey of discovery, and later European settlement included a whaling station. A visit by Missionaries Williams, Colenso, Matthews and Stack heralded the coming of Christianity to the district in 1838 and their crusade proved very successful with the local people.

The area around the bay has long been a Maori stronghold. The nearby pā at Te Mawhai was refortified by Henare Potae in the 1860s during the battles between the Ngati Porou and the warriors that followed the Pai Mārire movement (commonly known as Hauhau).

The town's modern economy is mainly based on agriculture and forestry, with some tourism.

Tokomaru Bay's population is predominantly Māori, with the area being a stronghold for the Ngāti Porou iwi.

The proportion of people born overseas was 2.8%, compared with 27.1% nationally. 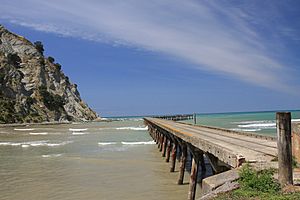 In October 2020, the Government committed $5,756,639 from the Provincial Growth Fund to upgrade Pakirikiri, Tuatini, Waiparapara, and 26 other Ngāti Porou marae. The funding was expected to create 205 jobs.

Mata School, located inland from Tokomaru Bay, is a Year 1–8 state primary school with a roll of 6.

All these schools are co-educational. School rolls are as of July 2016.

All content from Kiddle encyclopedia articles (including the article images and facts) can be freely used under Attribution-ShareAlike license, unless stated otherwise. Cite this article:
Tokomaru Bay Facts for Kids. Kiddle Encyclopedia.