It is also known as the East Coast region, although it is often divided into the East Coast proper, also known as East Cape, north of the city, and Poverty Bay, the area including and surrounding the city. The region is also sometimes referred to as the East Cape, although that also refers specifically to the promontory at the northeastern extremity. More recently, it has been called Eastland, although that can also include Opotiki in the eastern Bay of Plenty to the northwest, and Wairoa to the south.

Its Māori name, Te Tai Rāwhiti, means the Coast of the Sunrise, reflecting the fact that it is the first part of the New Zealand mainland to see the sun rise.

The district is located in the northeastern corner of the North Island. It ranges from the Wharerata Hills in the south, which divide it from the Wairoa district in the Hawke's Bay region, to Lottin Point in the north. The western boundary runs along the Raukumara Range, which separates it from the Opotiki district. In the southwest, its boundary runs along the western edge of Te Urewera National Park.

Inland, the land is rough, predominantly forested, hill country. A spine of rough ridges dominates the centre of the region, culminating in the impressive bulk of the 1752 metre Mount Hikurangi in Waiapu Valley in the region's northeast. This mountain is the fifth highest mountain in the North Island, and the highest that is not a volcano. Regarded as sacred by the Māori, there is some justification to the claims that this is the first mountain to see the sun in summer.

The region's population has higher than the national average proportion of Māori - over 50% in some areas - and still maintains strong ties to both Māori tradition and the iwi and marae structure. The predominant iwi are Ngāti Porou, Rongowhakaata, Ngai Tamanuhiri, Te Aitanga a Mahaki.

The region is sheltered by high country to the west and has a dry, sunny climate. It has a yearly average of 2,200 sunshine hours. The annual rainfall varies from about 1000mm near the coast to over 2500mm in higher inland country.

Gisborne has the smallest percentage of population born overseas at 9.7% compared to 25.2% for New Zealand as a whole. The highest of these are British totalling 1,335 or 3.1% of the population. Furthermore, 73.0% of the population could speak in one language only, 16.2% in two languages and 1.1% in three or more languages. 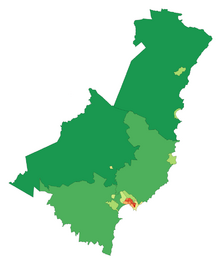 A map of population density in the Gisborne Region at the 2006 census
Main page: 2007 Gisborne earthquake

At 8.55pm (NZDT) on 20 December 2007, the Gisborne region was hit by an earthquake of Richter magnitude 6.8, centred in the Hikurangi Trench, 50 km southeast of Gisborne at a depth of 40 km. Mercalli intensities of 7-8 were experienced, with three buildings substantially collapsed in the CBD and others experiencing some structural damage. One death was reported (a heart attack of an elderly woman, sustained during the quake) plus minor injuries.

All content from Kiddle encyclopedia articles (including the article images and facts) can be freely used under Attribution-ShareAlike license, unless stated otherwise. Cite this article:
Gisborne District Facts for Kids. Kiddle Encyclopedia.