Tolaga Bay (Māori: Uawa) is both a bay and small town on the East Coast of New Zealand's North Island located 45 kilometres northeast of Gisborne and 30 kilometres south of Tokomaru Bay.

The region around the bay is rugged and remote, and for many years the only access to the town was by boat. Because the bay is shallow, a long wharf – the second longest in New Zealand (600m) after the Tiwai Point wharf at Bluff (1,500m) – was built in the 1920s to accommodate visiting vessels. The last cargo ship to use the wharf loaded a cargo of maize in 1967.

The town is a popular holiday spot. Its population is predominantly Māori, a centre of the Te Aitanga-a-Hauiti hapū and home of Ariki – Te Kani a Takirau and Tohunga – Rangiuia.

The Uawa River reaches the Pacific Ocean in the middle of Tolaga Bay. There is a bar at the river mouth with around 2 metres of water at high tide. The Uawa River is called the Hikuwai further up. Tributaries include the Waiau and the Mangaheia. In 2018 heavy rains washed huge amounts of discarded forestry timber (or slash) down the Uawa River, which choked up the estuary, covered the beach, and caused extensive damage to farms and houses.

An island in the bay was originally named Spöring Island by Cook, after his expedition's assistant naturalist and instrument maker, Herman Spöring, a Finnish botanist. It is however today again known by its Māori name, Pourewa.

The proportion of people born overseas was 5.8%, compared with 27.1% nationally.

Although some people objected to giving their religion, 51.1% had no religion, 34.5% were Christian, 0.2% were Buddhist and 5.0% had other religions. 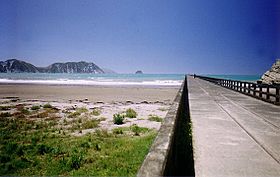 Tolaga Bay was named by Lt. James Cook in 1769. Described as "an obvious corruption of a Maori name", the exact derivation of the name is unclear. It may have been a misunderstanding of "teraki" or "tarakaka", referring to the local south-westerly wind rather than the place. The original Māori name is Uawa Nui A Ruamatua (shortened to Uawa), and some local residents now refer to the area as Hauiti, and themselves as Hauitians from the local hapū Te Aitanga-a-Hauiti.

At the time of Cook's visit, according to Anne Salmond, here "a famous school of learning (Known as Te Rawheoro) that specialized in tribal lore and carving was sited..." Tupaia, the Raiatean navigator accompanying Cook since Tahiti, met with the tohunga, priest, of this whare wananga. Tupaia exchanged news of the "Māori island homelands, known to Māori as 'Rangiatea' (Ra'iatea), 'Hawaiki' (Havai'i, the ancient name for Rai'iatea), and 'Tawhiti' (Tahiti)." The Māori viewed Tupaia as a tohunga, and many children born during his visit bore his name. Additionally, Tupaia made a sketch within the rock shelter of Opoutama ('Cook's Cove' or 'Tupaia's Cave'), according to Joel Polack.

In the 1830s there was a thriving flax trade involving early European traders like Barnet Burns. By 1998, the wharf had deteriorated and was in danger of being closed. In response, the Tolaga Bay Save the Wharf Trust raised funds and gained technical help to restore it. The wharf has now been re-opened and the refurbishment project should finish by May 2013.

Two marae are located south of the main township:

Three marae are located north of the main township:

Both schools are co-educational. Rolls are as of July 2016.

All content from Kiddle encyclopedia articles (including the article images and facts) can be freely used under Attribution-ShareAlike license, unless stated otherwise. Cite this article:
Tolaga Bay Facts for Kids. Kiddle Encyclopedia.