Tolgus Mount (also Tolgus or Tolgoose) is a village, valley, and district in the parish of Redruth in Cornwall, England, United Kingdom. It is located to the northwest of town of Redruth across the A30 road and falls within the Redruth North ward on Cornwall Council. Historically there were several mines in the area, mining tin and copper. 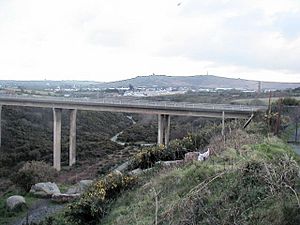 The A30 road crosses the stream near West Tolgus

The Cornish Goldsmith's Centre lies the old mill at Tolgus today, although this northern part of the village is closest to North Country and often considered part of it. Tolgus Tin, covering 20 acres, is now a working museum, showcasing the old mining machinery. The land surrounding this mill forms part of West Cornwall Bryophytes Site of Special Scientific Interest.

There is a candle factory at Tolgus Mount "where the path leads towards the Old Portreath Road". There is a house called Tolgus House in the village, occupied by Edmund Percival James in the 1960s. Other features in the area include Brunton's arsenic calciner, Tehidy Holiday Park, Tricky's Hotel, Tolgus Cottage and Dalgover House. There is a full-scale replica of a steam carriage which William Murdoch built as a working model in 1784 called "The Murdoch Flyer" situated in the centre of Tolgus roundabout on the other side of the A30 on the outskirts of Redruth. The road from there leads across the A30 to Tolgus.

All content from Kiddle encyclopedia articles (including the article images and facts) can be freely used under Attribution-ShareAlike license, unless stated otherwise. Cite this article:
Tolgus Mount Facts for Kids. Kiddle Encyclopedia.