Tomb of Nicanor facts for kids 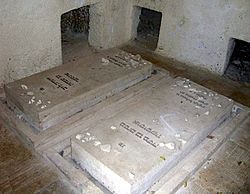 Tombs of Pinsker and Ussishkin in the cave

Tomb of Nicanor is a famous ancient cave. According to the Jewish tradition, this is the grave of Nicanor, who built the doors on the First Temple in Jerusalem. Two famous Zionist activists were buried there: Leon Pinsker and Menachem Ussishkin.

They planned to turn it into a national pantheon (monument) for the Jewish people. After the establishment of the state of Israel the national pantheon was established on Mount Herzl in the west side of the city. The cave is located in the National Botanic Garden of Israel in the campus of Hebrew University of Jerusalem in Mount Scopus.

All content from Kiddle encyclopedia articles (including the article images and facts) can be freely used under Attribution-ShareAlike license, unless stated otherwise. Cite this article:
Tomb of Nicanor Facts for Kids. Kiddle Encyclopedia.