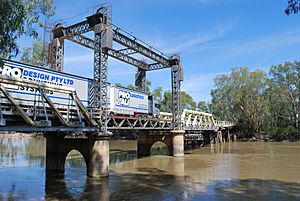 Tooleybuc is a town in the western Riverina district of New South Wales, Australia. The town is located on the Mallee Highway, 919 kilometres (571 mi) south west of the state capital, Sydney and 381 kilometres (237 mi) north west of Melbourne. Situated on the banks of the Murray River across from Piangil in the neighbouring state of Victoria, at the 2011 census, Tooleybuc has a population of 277. The town is in the Murray River Council local government area. The Tooleybuc Bridgekeepers Cottage close to the Tooleybuc Bridge is of particular local historic interest. It is open to the public.

The Post Office opened on 1 February 1873 and closed in 1885. However, a Post Office agency has been run in the town for many years, usually in the General Store.

In 1876 the settlement at Tooleybuc was described in the following terms:

Tooley Buc is on the New South Wales side of the river, and is on the mail road between Swan-hill and Balranald, being nearly equidistant between the two places. There is no township there, unless a large public-house and a small and comical-looking wooden chapel, which, by the bye, appeared to be unused, can be held to constitute one, but there is a good deal of settlement in the neighbourhood. A store and post-office are attached to the public-house. Tooley Buc is a crossing-place for sheep and cattle.

Tooleybuc has a number of heritage-listed sites, including:

Tooleybuc is home to a historic bridge over the Murray River. Constructed in 1925, the bridge is designed to rise to let paddle steamers through. In 1974, the paddle steamer "Pevensey" collided with the bridge after passing through the open bridge heading upstream. The steamer attempted to move to the south bank after clearing the bridge, but was caught in the strong current and swept sideways into the east side of the bridge. The bridge sustained no noticeable damage, but the "Pevensey" suffered some damage to her upper works. After being pulled off by a team of locals who were gathered to see her come through the bridge, the "Pevensey" refueled and made minor repairs, before heading upstream to Echuca.

Tooleybuc Central School is a K-12 school. It began as a primary school in 1916, and in 1952 surrounding small schools were absorbed into it to form the Central School. It has students from the NSW towns of Kyalite, Goodnight and Koraleigh, as well as farm areas within that range. It also serves students from Victoria, especially for high school, for the towns and localities of Nyah, Nyah West, Wood Wood, Piangil, Natya, Kooloonong and surrounding areas.

All content from Kiddle encyclopedia articles (including the article images and facts) can be freely used under Attribution-ShareAlike license, unless stated otherwise. Cite this article:
Tooleybuc Facts for Kids. Kiddle Encyclopedia.