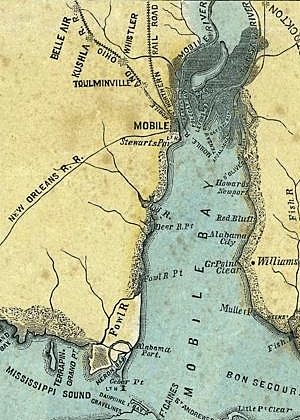 Toulminville is a neighborhood of Mobile, Alabama, United States. It began as a small settlement on the property of Harry Theophilus Toulmin, who served as Sheriff of Mobile County in the 1830s. During the American Civil War, Toulminville was mapped along the Mobile and Ohio Railroad as a significant settlement, northwest of Mobile (see map). In 1945, the remainder of Toulminville was annexed into the city of Mobile. The area of Toulminville has varied over the past decades from being an upper-middle class suburb to having a serious crime problem during most of the 1980s and 1990s, although the trend has been reversed in recent years.

Suburbanization started after World War II, as highways were built and new houses were built outside the city. Middle and upper-class whites began to move out of the city to newer housing, especially after desegregation following civil rights advances of the 1960s. A perceived upsurge of crime on Mobile's north side contributed to this white migration. The district was majority white in 1960 and became nearly 80% black by 1975. Toulminville was the heart of the district that elected John LeFlore to the Mobile County Commission; he was a Mobile NAACP leader and the first African American elected to the county commission.

Upper-class neighborhoods along Stanton and Summerville streets retained their white population for some time. In the 1980s they became majority black and retained high property values. While Stanton and Summerville are middle-class areas, most of Toulminville is lower-class. During most of the 1980s and 1990s with its economic and drug problems, this area had a serious crime problem. That trend has reversed due to a concerted effort by the Mobile Police Department and community leaders in Toulminville.

Toulminville was the birthplace of United States Surgeon General William Crawford Gorgas, who worked to control yellow fever and malaria during World War I. Several streets and an elementary school were named after him. Figures Park, named for Senator Micheal Figures, an influential African-American politician of the 20th century, was originally named Gorgas Park, in honor of the general. This neighborhood was the adolescent home of baseball legend Hank Aaron.

All content from Kiddle encyclopedia articles (including the article images and facts) can be freely used under Attribution-ShareAlike license, unless stated otherwise. Cite this article:
Toulminville, Alabama Facts for Kids. Kiddle Encyclopedia.