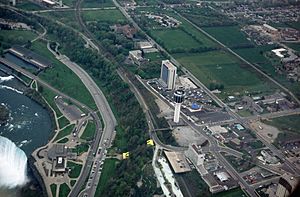 Konica Minolta Tower (aerial view), before construction of surrounding hotels and Fallsview Casino (which was built on the footprint of the building in the lower-right) 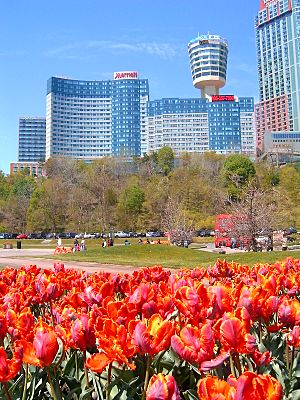 The Tower Hotel, opened in 1962, is located in the Fallsview district of Niagara Falls, Ontario and was the first of the contemporary observation towers built near the brink of the Falls. It features an indoor observation deck, restaurant, wedding chapel, and hotel. From street level, the tower is 99 metres (325 feet) tall; however, it is situated 160 metres (525 feet) above the falls. The tower assumed its present name in 2010 as a result of its most recent renovation; however, as Minolta was the longest-tenured sponsor of the building, it is frequently still known as the Minolta Tower among tourists and locals.

For more than 100 years, there had been various, but much smaller, towers built throughout the area with most of them being wooden structures. The two most famous were probably the wood construction tower that was located at the top of Drummond Hill on Lundy's Lane behind the historic Drummond Inn, and Street's Pagoda on Cedar Island.

Construction began in 1961, and was reportedly the first using of the slipform construction method in North America. One minor fire occurred on the roof on September 2, 1961, due to spillage of hot-mix concrete igniting a tarp and causing several propane tanks to explode. Damage was minimal, estimated at "a few thousand dollars", and nine people suffered minor injuries battling the blaze. 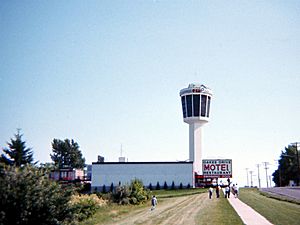 When the tower and surrounding area was first designed prior to groundbreaking on March 15, 1961, it was to be the centrepiece of a proposed hotel/convention centre. Due to finances, the accompanying hotel buildings were not built, and it would be over forty years before hotels began to rise adjacent to the tower.

The 2000s boom in large hotel construction on Fallsview Boulevard, such as the Fallsview Hotel, Hilton Hotel, and Embassy Suites by Hilton, as well as the nearby Oakes Hotel and Radisson, has diminished the Tower Hotel's prominence as a landmark. All of these hotels strive to give their guests as good a view of the Falls as possible by taking advantage of their position of the height on land above the falls, once dominated solely by the Tower Hotel. In contrast, the airspace around the Skylon Tower remains fairly open, thanks to its position further down the Niagara River away from the American Falls and Horseshoe Falls.

The Tower Hotel was originally called the Seagram Tower, named after the House of Seagram business in Montreal, Quebec. Over the years, due to multiple bankruptcies and ownership changes, tower names changed between Heritage Tower (1969), Royal Inn Tower (1971), Royal Center Tower (1972), Panasonic Tower (1973), Minolta Tower (1984), and Konica Minolta Tower Centre (2003) with the merger of Konica and Minolta in 2003. The tower underwent renovations again in 2010, resulting in its colour reverting to the original white, the banner displaying Konica Minolta being replaced by the title Tower Hotel, and the removal of the exterior clocks.

Located on the 25th floor, this deck features a panoramic view of the falls and Niagara River in addition to floor-to-ceiling windows treated with a non-glare finish designed to enhance photography. There are many historical photos and news articles about the construction of the tower mounted around the deck in addition to pay-per-use telescopes. The observation deck is now closed and only available for weddings.

The restaurant has an International House of Pancakes location on the 26th floor, previously home to Marilyn's Bistro & Lounge, a restaurant themed after Marilyn Monroe in honour of the film, Niagara, in which she starred. The tower's original, award-winning gourmet Pinnacle Restaurant had been located there for many years.

Marketed through Niagara Fallsview Weddings, the tower chapel provides fully serviced weddings including consultants, cake and flowers, an officiant, and photography. Multiple packages are available and include accommodations. Fully legal weddings are offered.

In 2002, the tower re-opened after extensive renovations to include the four-star Ramada Plaza Fallsview. This franchise was lost and the hotel has operated without the Ramada flag since 2011 choosing to instead go by the new name The Tower Hotel.

All content from Kiddle encyclopedia articles (including the article images and facts) can be freely used under Attribution-ShareAlike license, unless stated otherwise. Cite this article:
Tower Hotel (Niagara Falls) Facts for Kids. Kiddle Encyclopedia.