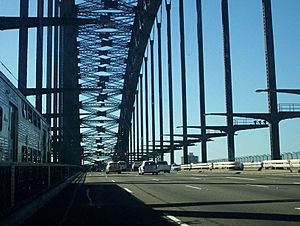 Traffic crossing the Sydney Harbour Bridge on the Bradfield Highway in Sydney.

An extensive multi-modal transport system serves the state of New South Wales, Australia. The lead government agency responsible for the network's operation and development is Transport for New South Wales.

Roads and Maritime Services is a New South Wales Government agency responsible for major road infrastructure, licensing of drivers, and registration of motor vehicles. The RMS directly manages State roads and provides funding to local councils for regional and local roads. In addition, with assistance from the Federal Government, the RMS also manages the NSW national highway system. Across the state, the RMS manages 4787 bridges and 17,623 km of State Roads and Highways including 3105 km of National Highways.

According to the New South Wales State Plan, the state has Australia's largest public transport system. Indeed, in the 1920s, Sydney also boasted the southern hemisphere's largest tram network. Public transport in Sydney accounts for almost double the share of commuter journeys in other state capitals. The network is regulated by TfNSW, which is working towards an integrated network serving Sydney, Newcastle, the Central Coast, the Blue Mountains, Wollongong and the Illawarra.

Major airports are located at

Smaller regional airports are listed at List of airports in Australia. Over the past 30 years, there have been various moves towards a Second Sydney Airport.

Major seaport facilities are located at

Regional ports at Eden and Yamba are administered by the New South Wales Maritime Authority.

All content from Kiddle encyclopedia articles (including the article images and facts) can be freely used under Attribution-ShareAlike license, unless stated otherwise. Cite this article:
Transport in New South Wales Facts for Kids. Kiddle Encyclopedia.