The authority subsumed the Transport Construction Authority and the Country Rail Infrastructure Authority, and plans and coordinates the functions of RailCorp, the State Transit Authority and Roads & Maritime Services. It also owned Metro Transport Sydney until the shut down of the company in July 2013, after the decommissioning of the Sydney Monorail and the Sydney light rail becoming under direct ownership of Transport for NSW.

The chief executive officer, called Secretary, for the agency is Tim Reardon. The authority reports to the New South Wales Minister for Transport and Infrastructure, presently Andrew Constance and the Minister for Roads, Maritime and Freight, presently Melinda Pavey. Ultimately the ministers are responsible to the Parliament of New South Wales.

The authority develops regulations, policies and legislation to ensure that transport is delivered to a high standard, meets community needs, protects assets and public money, minimises environmental impact, and ensures the community is safe. The authority manages an annual multibillion-dollar transport budget and in partnership with the transport operating agencies manages more than A$106 billion in property, plant and equipment assets. Funding is provided for bus, rail, light rail, roads, ferry and community transport services and related infrastructure. The authority also funds concession schemes such as the School Student Transport Scheme, the Private Vehicle Conveyance Scheme and the Taxi Transport Subsidy Scheme.

The authority was created as an integrated transport authority with six divisions, each headed by a deputy director general:

There have been three departmental leaders of Transport for New South Wales since 2011:

The logo for public transport in NSW, dubbed 'The Hop'. 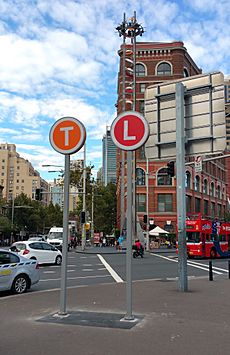 Transport for NSW is introducing unified signage and wayfinding across its network. These T (train) and L (light rail) signs identify the transport modes available from Central station.

Transport for NSW directly manages most train, bus, ferry and light rail services in New South Wales. The authority manages the route design, timetabling and branding of these services and also provides passenger information via printed material, a telephone service and a website. Operation of the services is contracted out to a mixture of other government-owned organisations and private enterprise.

Transport for NSW public transport services are simply branded Transport. The following sub-brands are used depending on the type of service:

Passengers made 676 million public transport journeys in the 2015-16 financial year. Patronage on the Sydney rail network increased during this period–customer patronage grew by 10.5 per cent, while intercity patronage grew by 11 per cent.

Transport for NSW provides a trip planner and transport service information on its customer service website, www.transportnsw.info, and via its 24-hour information line, 131500. These services, outsourced to Serco since July 2010, were previously known as the Transport InfoLine or simply 131500. A parallel Teletype service for hearing and speech impaired passengers is available on 1800 637 500.

All content from Kiddle encyclopedia articles (including the article images and facts) can be freely used under Attribution-ShareAlike license, unless stated otherwise. Cite this article:
Transport for New South Wales Facts for Kids. Kiddle Encyclopedia.