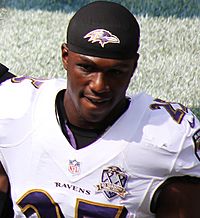 Tray Walker (August 5, 1992 – March 18, 2016) was an American football cornerback. He played for the Baltimore Ravens of the National Football League (NFL). He played college football at Texas Southern, and was drafted by the Ravens in the 4th round of the 2015 NFL draft. He was born in Miami, Florida.

Walker died in Miami, Florida when he was dirt biking when his bike was hit by a car. He died the next day on March 18, 2016 from his injuries. He was aged 23.

All content from Kiddle encyclopedia articles (including the article images and facts) can be freely used under Attribution-ShareAlike license, unless stated otherwise. Cite this article:
Tray Walker Facts for Kids. Kiddle Encyclopedia.