The German-American Treue der Union Monument (Loyalty to the Union), is located in the Kendall County community of Comfort in the U.S. state of Texas. It was dedicated on August 10, 1866 to commemorate the German-Texans who died at the 1862 Nueces massacre. Thirty-four were killed, some executed after being taken prisoner, for refusing to sign loyalty oaths to the Confederacy. With the exception of those drowned in the Rio Grande, the remains of the deceased are buried at the site of the monument. This monument was the first authorized to fly the Star-Spangled Banner at half-mast in perpetuity. It was listed on the U.S. National Register of Historic Places in 1978.

In 1862, the Confederate States of America imposed martial law on Central Texas, due to resistance to the Civil War. Jacob Kuechler served as a guide for sixty-one conscientious objectors attempting to flee to Mexico. Scottish born Confederate irregular James Duff and his Duff's Partisan Rangers pursued and overtook them at the Nueces River.

Thirty-four were killed, some executed after being taken prisoner. Jacob Kuechler survived the Nueces massacre. The cruelty shocked the people of Gillespie County and surrounding areas. Two thousand took to the hills to escape Duff's reign of terror.

On August 19, 1865, Eduard Degener, Eduard Steves, and William Heuermann paid $20 for a lot in Comfort, for the purpose of building a monument. The bodies of those who drowned in the massacre were never recovered. The bodies of the remaining massacre victims were recovered for burial by local residents in a mass grave on the lot purchased by Degener, Steves and Heuermann. On August 20, 1865, at Comfort, Texas, three hundred people attended the funeral for the remains of the victims of the massacre. The funeral cortege was accompanied by Federal troops who fired a salute over the mass grave. Edward Degener, father of victims Hugo and Hilmar, delivered the eulogy. 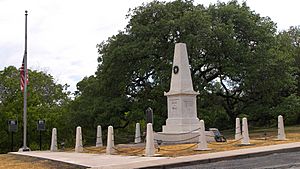 Treue der Union monument, with flag flying at half mast

With donations from local residents and families of the victims, the Treue der Union Monument was dedicated on August 10, 1866 in Kendall County. The obelisk stands twenty feet high and was constructed of native limestone by local stonemasons and several carvers. The main obelisk weighs 35,700 pounds, with the top containing the original four name tablets. The United States 1865 flag has thirty-six stars, representing the number of states at the time of the monument dedication. On the lawn at the base are four name tablets in German. Inside the second course of the monument is a time capsule.

All content from Kiddle encyclopedia articles (including the article images and facts) can be freely used under Attribution-ShareAlike license, unless stated otherwise. Cite this article:
Treue der Union Monument Facts for Kids. Kiddle Encyclopedia.