James Trimble first bought land in the area on the banks of the west branch of the Brandywine River in 1744, with his descendants living in the hamlet until 1948. Several buildings survive from the eighteenth century. Buildings in the area include the Trimble's farmhouse, a mill, blacksmith and wheelwright shops, and a boarding school. The area was listed by the National Register of Historic Places as a historic district in 1985. 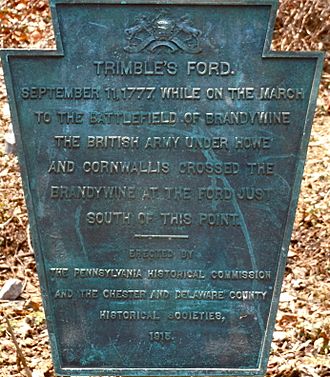 1915 historical marker near Trimble's Ford, where over 12,000 British troops crossed the Brandywine on September 11, 1777 during the Battle of Brandywine.

During the Battle of Brandywine on September 11, 1777, over 12,000 British troops under Generals William Howe and Charles Cornwallis crossed the west branch of the Brandywine at Trimble's Ford. The troops began the flanking maneuver in Kennett Square, made their first crossing at Trimble's Ford, then crossed the east branch at Jefferis Ford, before engaging the American troops near Birmingham Friends Meetinghouse.

All content from Kiddle encyclopedia articles (including the article images and facts) can be freely used under Attribution-ShareAlike license, unless stated otherwise. Cite this article:
Trimbleville Historic District Facts for Kids. Kiddle Encyclopedia.