The Trinity Independent Chapel (also known as the Congregational or Methodist chapel) was an architecturally significant early Victorian church in the East End of London. It was destroyed in the bombing during World War II, and re-built in Modernist style afterwards. In the late 1990s the building was sold to the Calvary Charismatic Baptist Church, and since then has served as their Prayer Temple and international headquarters.

The Trinity Independent Chapel was designed in 1840-41 by William Hosking FSA, and built by John Jay. It occupied a site at the corner of East India Dock Road and Augusta Street (Annabel Close) in Poplar, in the London Borough of Tower Hamlets, near the East India Docks. With its large, elegant frontage—a combination of Grecian and Italian Renaissance styles—directly facing the main road, this lavish building came to dominate its streetscene at a time when chapel architecture in the East End of London was generally low-key.

The bold design was financed by the shipyard owner George Green, a prominent local Congregationalist with non-denominational sympathies. Green contributed to many philanthropic causes in Poplar and Blackwall: "minister's house, sailors' home, schools, and almshouses", according to the Survey of London. The Sailors' Home (later Board of Trade offices and other uses, converted into flats in the 1980s) was built at 133 East India Dock Road, beyond the Wesleyan Methodist 'Queen Victoria Seaman's Rest'. He also endowed George Green's School (1828), which was rebuilt as the George Green Centre at Island Gardens in 1974-8.

The first minister at Trinity Chapel was the Rev. George Smith (1803-1870), Secretary of the Congregational Union of England and Wales. His pink granite pedestal memorial can be seen today at the non-denominational Abney Park Cemetery in Stoke Newington.

Probably the most noteworthy and influential twentieth century minister was the Rev William Dick. In an area of enormous deprivation, the chapel became, under his inspired leadership, a beacon of hope for the dispossessed and downtrodden. The church's efforts to help improve the lives of the local population, already struggling before being hit by the Blitz, were seen as an integral part of its Christian mission. 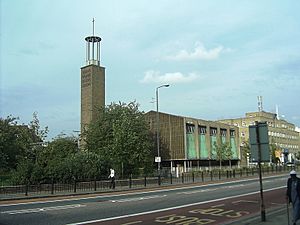 Unfortunately, being located in the heart of the industrial and commercial East End of London, Green and Hosking's magnificent chapel was destroyed in the bombing in 1944. The chapel's replacement on the same site, the New Trinity Congregational Church, formed part of the Exhibition of Live Architecture for the Festival of Britain in 1951, as its site abutted the Lansbury Estate development (appropriately named after the Labour politician George Lansbury, who went to prison for dispersing local tax money directly to the needy rather than passing it on to the London County Council). The church was re-built somewhat experimentally in a bold and very modern post-war style, using new materials such as concrete, and new building techniques. Social work continued to be a priority for the church community.

The only part of Hosking's chapel to survive the wartime bombing was the bell, which had been salvaged from the bombsite. This was incorporated into the new church, having been recast and repaired. A more fitting icon from the original chapel would have been hard to imagine, since the bell had always been the subject of great debate. When Green and Hosking agreed to include a bell in their design, they fell foul of the local Anglican clergy. The parish authorities knew of no previous independent meeting house that had incorporated a bell, so they instructed Green and Hosking to render the bell immobile and silent, to prevent it from competing with their parish church. Gradually, as chapel design came more and more to adopt Anglican church architecture (the two often being indistinguishable by the late Victorian era), the bell was allowed to be unfixed. It rang in the old chapel for the last time on the morning war was declared.

All content from Kiddle encyclopedia articles (including the article images and facts) can be freely used under Attribution-ShareAlike license, unless stated otherwise. Cite this article:
Trinity Independent Chapel Facts for Kids. Kiddle Encyclopedia.