Kids Encyclopedia Facts
This page is about the Portuguese explorer. For the island named after him, see Tristan da Cunha.

Tristão da Cunha (sometimes misspelled Tristão d'Acunha; c. 1460 – c. 1540) was a Portuguese explorer and naval commander. In 1514, he served as ambassador from King Manuel I of Portugal to Pope Leo X, leading a luxurious embassy presenting in Rome the new conquests of Portugal. He later became a member of the Portuguese privy council.

Da Cunha was born in Portugal, c. 1460. He was nominated as first viceroy of Portuguese India in 1504, but could not take up this post owing to temporary blindness.

In 1506 he was appointed commander of a fleet of 15 ships sent to the east coast of Africa and off India. His cousin, Afonso de Albuquerque, was in charge of a squadron of five vessels in this fleet that subsequently detached. Their mission was to conquer Socotra Island and build a fortress there, hoping to close the trade in the Red Sea. They sailed together until they reached Mozambique. In the Mozambique Channel they found his friend Captain João da Nova stranded while returning from India. They rescued him and the ship Frol de la mar, both joining the fleet. After a series of successful attacks on Arab cities on the east coast of Africa, they headed to Socotra. 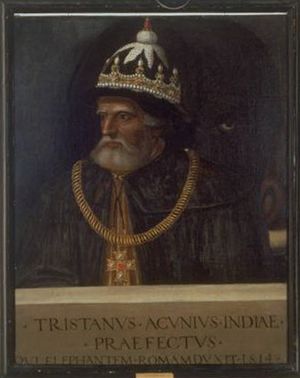 On this voyage Tristão da Cunha discovered a group of remote islands in the south Atlantic Ocean, 2,816 km (1,750 mi) from South Africa. Although rough seas prevented a landing then, he named the main island after himself, Ilha de Tristão da Cunha, which was later anglicized to Tristan da Cunha.

He then set his eyes on Ajuran Empire territory, where the Battle of Barawa was fought. After a long period of engagement, the Portuguese soldiers burned the city and looted it. However, fierce resistance by the local population and soldiers resulted in the Portuguese failing to permanently occupy the city. The inhabitants who had fled to the interior would eventually return and rebuild the city. Tristão da Cunha was wounded in this battle and would sail in Socotra.

After his loss in a battle with the Ajuran Empire, he decided to re-group his men in Socotra islands and set sail for Mogadishu. But word had spread of what had happened in Barawa, and a large troop mobilization had taken place. Many horsemen, soldiers and battleships in defense positions were now guarding the city. Nevertheless, Tristão still opted to storm and attempt to conquer the city, although every officer and soldier in his army opposed this, fearing certain defeat if they were to engage their opponents in battle.

After a while, he distinguished himself in India in various actions, such as the Siege of Cannanore: the Portuguese garrison was on the verge of being overwhelmed, when on 27 August the fleet of 11 ships under Tristão da Cunha coming from Socotra appeared and relieved them with 300 men. 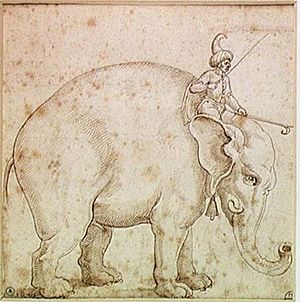 Elephant Hanno and his mahout, Pen and ink, 1575, Museum of Fine Arts in Angers.

After returning to Europe, Tristão da Cunha was sent as ambassador from King Manuel I to Pope Leo X in 1514 to present the new conquests of the Portuguese Empire, having Garcia de Resende as his secretary.

The huge, luxurious embassy of one hundred and forty persons made its way through Alicante and Majorca, arriving at Rome outskirts in February. They walked the streets of Rome on March 12, 1514 in an extravagant procession of exotic wildlife and wealth of the Indies, with many dressed in "Indian style". The procession featured an elephant named Hanno, as a gift to the pope, and forty-two other beasts, including two leopards, a panther, some parrots, turkeys and rare Indian horses. Hanno carried a platform of silver on its back, shaped as a castle containing a safe with royal gifts, including vests embroidered with pearls and gems, and coins of gold minted for the occasion. The pope received the procession in the Castel Sant'Angelo. The elephant knelt down thrice in reverence and then, following a wave of his Indian mahout (keeper), used its trunk to suck water from a bucket and sprayed it over the crowd and the Cardinals.

By 29 April 1514, the Portuguese had depleted their funds, but they sought a bull signed by the pope, who sent back rich gifts to King Manuel. The king responded with a ship full of spices and, later, an indian rhinoceros sent to him from the sultan Muzaffar Shah II of Gujarat. The boat that transported it was wrecked off Genoa on early February 1516, and the rhinoceros was portrayed by Albrecht Dürer in his very famous Rhinoceros woodcuts in 1515.

Although Tristão da Cunha had never assumed the post of Viceroy of India, his son Nuno da Cunha was the 9th Governor of Portuguese India in 1529. The tomb of Tristão da Cunha is located at the convent of Nossa Senhora da Encarnação in Olhalvo (in the municipality of Alenquer).

All content from Kiddle encyclopedia articles (including the article images and facts) can be freely used under Attribution-ShareAlike license, unless stated otherwise. Cite this article:
Tristão da Cunha Facts for Kids. Kiddle Encyclopedia.