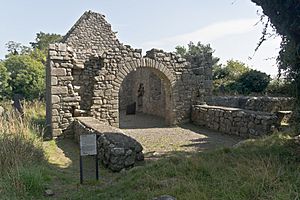 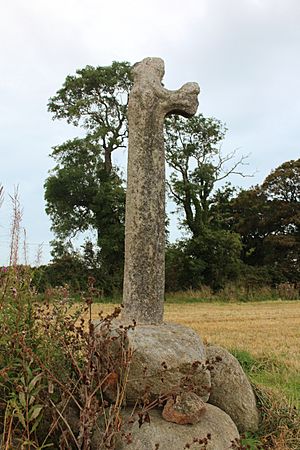 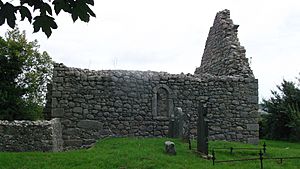 Tully Church is an ancient church in County Dublin, Ireland.

The original church structure dates to the 6th–9th centuries AD. One ancient name is Telach-na-nun ecspop (Tullow of the bishops) and it must have been an important venue if bishops met there. There is a legend that seven bishops started out from there to visit St Brigid at Kildare. Elsewhere these bishops are mentioned as the "Seven Bishops of Cabinteely" (Alice Curtayne, Saint Brigid of Ireland)

In 1179 the Church was granted to the Priory of The Holy Spirit.

The church was in use up to about 1615. It came under the authority of Christ Church Cathedral, Dublin who supplied clergy to keep it going. It was reported to be in good condition when inspected in 1615, but according to a report in 1630 had been badly damaged in recent storms. After that it was abandoned and fell into ruin.

The cross by the roadside is set upon a plinth and is dedicated to James Crehan (Grehan) who apparently saved the Cross from being discarded when the level of the road was being adjusted in the late 1800s. The plinth replicates the soil removed leaving the Cross standing at its original height. There are a set of worn steps on one side of the plinth which allows one to climb up and view the Cross closely.

There is a second cross in the field opposite Tully Church and this can be accessed via a low wooden fence. This cross dates from the 12th century and is also reputed to be dedicated to St Brigit.

All content from Kiddle encyclopedia articles (including the article images and facts) can be freely used under Attribution-ShareAlike license, unless stated otherwise. Cite this article:
Tully Church Facts for Kids. Kiddle Encyclopedia.