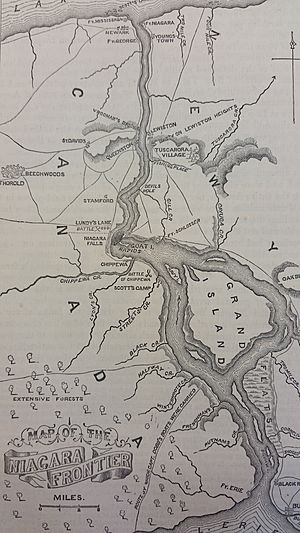 The Tuscarora Reservation (Nyučirhéʼę in Tuscarora) is an Indian reservation in Niagara County, New York. The population was 1,152 at the 2010 census. The Tuscarora are a federally recognized tribe and the Sixth Nation of the Haudenosaunee or Iroquois Confederacy active before the American Revolutionary War.

The Tuscarora tribe had migrated in ancient times from the New York area to the South, where they were based in the Carolinas. After extended conflict with European settlers and other Native Americans at the beginning of the 18th century and defeat in the Tuscarora War, most of the tribe migrated North, beginning in 1722.

They first located in the territory of the Oneida tribe in central New York. By the early 1800s, they declared their tribe fully relocated and said that remnant Tuscarora who stayed in the South would no longer be considered part of the tribe. The Tuscarora and Oneida became allies of the American Continental cause during the American Revolution, and of the United States during the War of 1812. During both wars, they suffered attacks by British armed forces and their First Nations allies in central New York. The Tuscarora were given land from the Seneca tribe (territory which they had taken from the Neutral Nation) in 1797). In 1803, the US government granted the Tuscarora a reservation in Niagara County.

In 1960, through the efforts of the powerful appointed official, Robert Moses of New York City, New York State seized 550 acres (2.2 km2) of the Tuscarora reservation to form a reservoir for the Robert Moses Niagara Power Plant operated by the New York Power Authority. New York needed 1,350 acres (5.5 km2) but only received 550 acres (2.2 km2) and had to pay $1,500 per acre per a United States Supreme Court Decision. This led to a displacement of tribal members and a serious disruption to their economy. After a lengthy court case and appeals, in 2003, the Power Authority agreed to compensate the tribe financially and return some unused land.

The reservation is a composite holding derived from (1) land given to the tribe the Seneca tribe, Land donated by the Holland Land Company, and (3) Trust territory held by the federal government.

According to the United States Census Bureau, the Indian reservation has a total area of 9.3 mi² (24.0 km²), all land. The reservation is located northeast of Niagara Falls, New York. It is surrounded by the Town of Lewiston. 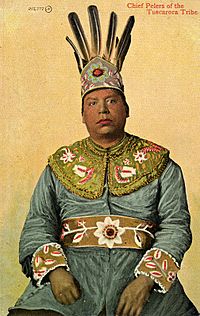 There were 398 households out of which 43.2% had children under the age of 18 living with them, 45.5% were married couples living together, 19.3% had a female householder with no husband present, and 28.4% were non-families. 21.1% of all households were made up of individuals and 5.5% had someone living alone who was 65 years of age or older. The average household size was 2.86 and the average family size was 3.36.

All content from Kiddle encyclopedia articles (including the article images and facts) can be freely used under Attribution-ShareAlike license, unless stated otherwise. Cite this article:
Tuscarora Reservation Facts for Kids. Kiddle Encyclopedia.