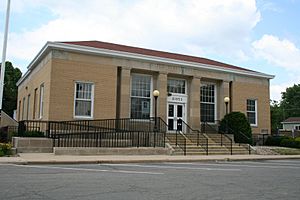 Tuscola is a city in Douglas County, Illinois, United States. The population was 4,480 at the 2010 census. It is the county seat of Douglas County.

The founding Supervisor of Tuscola township was O. C. Hackett, elected in 1868. Hackett was elected Supervisor with a majority of only one vote over W. B. Ervin. O. C. Hackett was the grandson of noted Kentucky frontiersman and Boonsborough resident Peter Hackett. O. C. planted Hackett's Grove, a sassafras grove situated on Section 31, Township 16, Range 9, on the east side of the township. This 20-acre (81,000 m2) grove is traversed by a branch of Scattering Fork of the Embarrass River, long known as Hackett's Run, and according to the History of Douglas County (1884), the grove had been owned by the Hacketts since long before Douglas County had an existence. O.C. Hackett's father, John Hackett, settled in nearby Coles County in 1835. Family legend holds that Abraham Lincoln stayed at the Hackett farm during the Lincoln-Douglas debates of 1858.

From the 1890s to the 1940s, Tuscola had a sizeable number of African-American citizens, including Arthur Anderson, the "most graceful walker" at the 1898 Colored Folks Cake Walk in Tuscola; his partner Cozy Chavous; the musician Cecil "Pete" Bridgewater, father of internationally known musicians Cecil Bridgewater and Ronnie Bridgewater; the educator and musician Ruth Calimese, daughter of automobile worker "Big Jim" Calimese; musician Solomon "Sol" Chavous; mail carrier and war veteran Bruce Hayden (father of distinguished violinist Bruce Hayden, Jr.); Lemuel and Nettie Riley; football star and garage owner Tommy Wright; and dozens of other people. Tuscola had two churches with mainly black congregations, the African Methodist Episcopal Church on North Niles, and the White Horse Riders church on Houghton Street. Unlike the neighboring town of Arcola, Tuscola did not have the ordinance, common in small Illinois towns at the time, that an African-American person could not be on the streets after sundown. The black and white people of Tuscola got along well. However, between 1922 and 1924 two large Ku Klux Klan gatherings were held in Tuscola. The 1924 rally consisted of nearly 2,000 Klan cars, a hundred marching Klansmen, burning crosses, and a naturalization ceremony in Tuscola's Ervin Park. 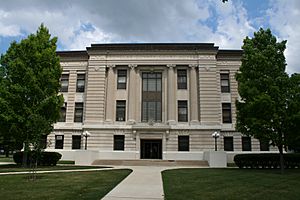 There were 1,885 households out of which 30.8% had children under the age of 18 living with them, 54.1% were married couples living together, 9.4% had a female householder with no husband present, and 33.1% were non-families. 29.7% of all households were made up of individuals and 14% had someone living alone who was 65 years of age or older. The average household size was 2.35 and the average family size was 2.93.

All content from Kiddle encyclopedia articles (including the article images and facts) can be freely used under Attribution-ShareAlike license, unless stated otherwise. Cite this article:
Tuscola, Illinois Facts for Kids. Kiddle Encyclopedia.