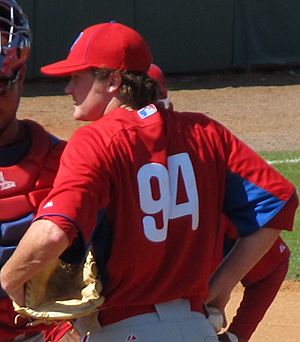 Tyson Colby Brummett (August 15, 1984 – July 3, 2020) was an American baseball player. He was born in Columbus, Mississippi. In 2012, he played as a pitcher in one Major League Baseball (MLB) game for the Philadelphia Phillies. He batted and threw right-handed and was mainly a starting pitcher.

Brummett was drafted by the Phillies in 2007. He played for five of their minor league affiliates until 2012, when the organization promoted him to the major leagues. He later signed for the Toronto Blue Jays and Los Angeles Dodgers.

On July 3, 2020, Brummett was piloting an airplane that crashed in the mountains north of Alpine, Utah. He died along with three passengers. He was 35.

All content from Kiddle encyclopedia articles (including the article images and facts) can be freely used under Attribution-ShareAlike license, unless stated otherwise. Cite this article:
Tyson Brummett Facts for Kids. Kiddle Encyclopedia.