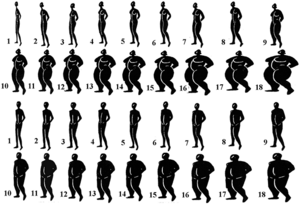 Body images to illustrate Obesity: Images 1 to 5 show people who are underweight 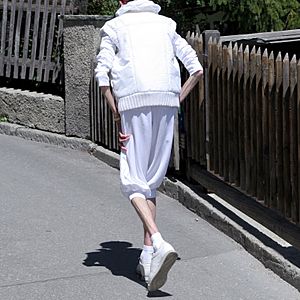 Image of an uderweight woman

The term underweight refers to humans that have much less weight than they should. Being underweight is bad for the overall health of the person affected. It is normal what a person's weights changes over time. Being underweight is often defined using a measure called the body mass index which calculates a score, based on height and weight. If this score is below 18.5, a person is generally said to be underweight. This is only a general indication, though as the scores must not be calculated for everyone. It does not apply to children and adolescents, for example.

Being underweight can have different causes:

There are problems that are related to being underweight. Very often being underweight is not the first problem. Rather, it often is the effect of another condition or disease. Unexpected weight loss requires the attention of a doctor. There might be another disease. If that disease is treated, the weight problem also disappears.

Another problem underweight people face is that the weight problem affects their health: Their immune system is weakened, and they may get sick more often. People who are underweight because they cannot get or afford the right food need special attention. Women who are underweight may not have their menstruation and face difficult pregnancies.

Once they were being underweight, psychically, they may feel sad and worried about their health. Therefore, family and friends should support them to help them get rid of their unhappiness.

All content from Kiddle encyclopedia articles (including the article images and facts) can be freely used under Attribution-ShareAlike license, unless stated otherwise. Cite this article:
Underweight Facts for Kids. Kiddle Encyclopedia.