Union Theological Seminary in the City of New York (UTS) is a ecumenical Christian liberal seminary in Morningside Heights, Manhattan, New York City. It is affiliated with neighboring Columbia University. Since 1928, the seminary has served as Columbia's constituent faculty of theology. In 1964, UTS also established an affiliation with the neighboring Jewish Theological Seminary of America.

UTS is the oldest independent seminary in the United States and has long been known as a bastion of progressive Christian scholarship, with a number of prominent thinkers among its faculty or alumni. It was founded in 1836 by members of the Presbyterian Church in the USA, but was open to students of all denominations. In 1893, UTS rescinded the right of the General Assembly of the Presbyterian Church to veto faculty appointments, thus becoming fully independent. In the 20th century, Union became a center of liberal Christianity. It served as the birthplace of the Black theology, womanist theology, and other theological movements. It houses the Burke Library at Union Theological Seminary, one of the largest theological libraries in the Western Hemisphere. 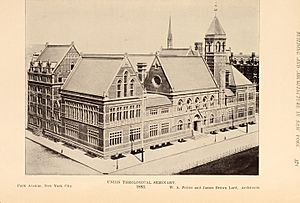 Union Theological Seminary was founded in 1836. During the late 19th century it became one of the leading centers of liberal Christianity in the United States. In 1891, Charles A. Briggs, who was being installed as the chair of biblical studies, delivered an inaugural address in which he questioned the verbal inspiration of Scripture. When the General Assembly of the Presbyterian Church in the U.S.A. vetoed Briggs' appointment and eventually deposed Briggs for heresy two years later, Union removed itself from denominational oversight. In 1939 the Auburn Theological Seminary moved to its campus and departed in 2014.

Among its graduates were the historian of Christianity Arthur McGiffert; biblical scholar James Moffatt; Harry Emerson Fosdick, the pastor of Riverside Church who served as professor during his tenure there; and the Socialist leader Norman Thomas. 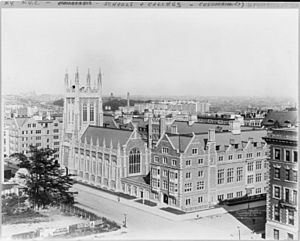 In 1895, members of the Union Theological Seminary Alumni Club founded Union Settlement Association, one of the oldest settlement houses in New York City. After visiting Toynbee Hall in London and inspired by the example of Hull House in Chicago, the alumni decided to create a settlement house in the area of Manhattan enclosed on the north and south by East 96th and 110th Streets and on the east and west by the East River and Central Park.

The neighborhood, known as East Harlem, was filled with new tenements but devoid of any civic services. The ethos of the settlement house movement called for its workers to "settle" in such neighborhoods in order to learn first-hand the problems of the residents. “It seemed to us that, as early settlers, we had a chance to grow up with the community and affect its development,” wrote William Adams Brown, Theology Professor, Union Theological Society (1892–1930) and President, Union Settlement Association (1915–1919).

Reinhold Niebuhr and Paul Tillich made UTS the center of both liberal and neo-orthodox Protestantism in the inter-war period. Niebuhr joined UTS in 1929 and Tillich in 1933. Prominent public intellectual Cornel West commenced a promising academic career at UTS in 1977. As liberalism lost ground to conservatism after the 1960s (while neo-orthodoxy dissipated) and thus declined in prestige, UTS ran into financial difficulties and shrank significantly because of a reduced student base.

Eventually, the school agreed to lease some of its buildings to Columbia University and to transfer ownership of and responsibility for the Burke Library to Columbia. These agreements helped stabilize the school's finances, which had been hobbled by increasing library costs and the need for substantial campus repairs.

On June 10, 2014, Jones announced that the Seminary would be joining the movement to divest from the fossil fuels industry in protest at the damage the industry is causing to the environment. The Seminary's $108 million endowment will no longer include any fossil fuel investments.

Although administratively independent from Columbia, Union is represented by one voting faculty member, and one non-voting student observer member, of the Columbia University Senate. 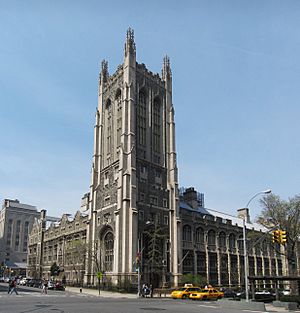 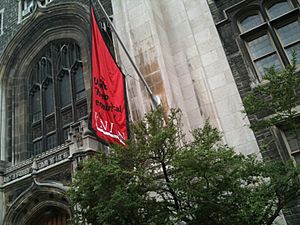 Union's campus is located in the Morningside Heights neighborhood of Manhattan, New York City, bordered by Claremont Avenue, Broadway, and West 120th and 122nd Streets. The brick and limestone English Gothic revival architecture, by architects Allen & Collens, completed in 1910, includes the tower, which adapts features of the crossing tower of Durham Cathedral. Adjacent to Teachers College, Barnard College, the Jewish Theological Seminary of America, and the Manhattan School of Music, Union has cross-registration and library access agreements with all of these schools.

The building was added to the National Register of Historic Places on April 23, 1980, and parts were made a New York City designated landmark in 1965. Some sections of the campus are now on long-term lease to Columbia University.

The Burke Library at Union Theological Seminary, one of the largest theological libraries in North America, contains holdings of over 700,000 items. The Burke's holdings include extensive special collections, including Greek census records from 20 CE, a rare 12th Century manuscript of the Life of St. Boniface, and one of the first African-American hymnals, published in Philadelphia in 1818.

The Burke Library also maintains a number of world-renowned archival collections, including the Archives of Women in Theological Scholarship and the Missionary Research Library Archives.

In 2004 Union's Burke Library became fully integrated into the Columbia University Libraries system, which holds over 10 million volumes. The library is named in honor of Walter Burke, a generous benefactor to the library who served as Chairman of the Board of Directors of the Seminary from 1976 to 1982.

In 1930, Dietrich Bonhoeffer was a Postgraduate Teaching Fellow at the seminary. He later returned in 1939 to be a member of the faculty and to escape Nazi harassment in Germany. Writing of his experience there in his book Barcelona, Berlin, New York, Bonhoeffer was dismayed by the liberalism of the seminary and its students, noting that, "The students are completely clueless with respect to what dogmatics is really about. They are not familiar with even the most basic questions. They become intoxicated with liberal and humanistic phrases, are amused at the fundamentalists, and yet basically are not even up to their level...." Referring to Union Seminary, Bonhoeffer noted: "A seminary in which numerous students openly laugh during a public lecture because they find it amusing when a passage on sin and forgiveness ...is cited has obviously, despite its many advantages, forgotten what Christian theology in its very essence stands for" (pp. 309–10). He soon regretted his decision and decided that he had to return to Germany to resist the Nazis. He took the last ship from New York to Germany in late August 1939. Due to his secret involvement with the 20 July plot on Hitler's life, he was executed at the Flossenbürg concentration camp on April 8, 1945, only 15 days before the United States Army liberated the camp.

Both Reinhold Niebuhr and Paul Tillich taught at the seminary. Nieburhr joined the faculty in 1929 and retired in 1952. Tillich was recruited by Niebuhr to UTS following his dismissal from the University of Frankfurt. Nazi officials terminated Tillich from the University of Frankfurt and placed him on their list of "undesirables." Tillich subsequently narrowly escaped arrest by the Gestapo in October 1933 and made his way out of Germany joining UTS in December, 1933.

Dr. Serene Jones, the seminary's first female president, was inaugurated in November 2008. Dr. Joseph Hough, UTS' immediate past president, is a Christian Democratic Socialist. Henry Sloane Coffin was a past president. Civil Rights Activist Cornel West joined the faculty in July 2012. Dr. James Hal Cone is one of the founders of liberation theology and is active in the development of African-American theology.

Union has also been home to Womanist theologians such as Delores S. Williams. Dr. Gary Dorrien is a social ethicist. Dr. James A. Forbes, the former senior pastor of the adjacent Riverside Church, is an adjunct professor at the seminary and had been a full-time, chaired professor before accepting the Riverside post.

All content from Kiddle encyclopedia articles (including the article images and facts) can be freely used under Attribution-ShareAlike license, unless stated otherwise. Cite this article:
Union Theological Seminary (New York City) Facts for Kids. Kiddle Encyclopedia.