Founded in 1809, its present building was built in 1922–23 and was designed by Charles W. Bolton & Son in Gothic Revival and Tudor Revival styles – it has also been described as "Collegiate Gothic". It features stained glass windows and marble furnishings.

During the 20th century, prominent ministers of the church included Adam Clayton Powell Sr. and Adam Clayton Powell Jr. Over the years, the church has served as a place for African American spirituality, politics and community. The Abyssinian Baptist Church congregation traces its history to 1809, when seamen from the Ethiopian Empire (then known as Abyssinia) helped lead a protest against segregated church seating. It worshiped in several places before building the present church structure.

The church and its associated community house were designated a New York City Landmark on July 13, 1993.

The congregation began after an incident in 1808, when visiting free Ethiopian seamen and allied African-American parishioners left the First Baptist Church in protest over being restricted to racially segregated seating. They named their new congregation the Abyssinian Baptist Church after the historic name of Ethiopia.

The congregation worshiped at a number of places: first on the corner of William and Frankfort Streets, then at 44 Anthony (Worth) Street until the mortgage upon the church was foreclosed upon in 1854, at which time the congregation worshipped temporarily at 356 Broadway. Then in 1856 they established themselves at 166 Waverly Place in Greenwich Village, an area then sometimes called "little Africa." It was during their time here that the church was split into two "warring" factions, one for the Rev. William M. Spelman, who had been with them since 1855, and one desiring his removal. In 1885, Rev. Spelman was ousted from the pulpit, at which time he and his followers went to another church on 37th Street. In 1902 the congregation moved uptown with the movement of the African American population, to 242 West 40th Street, and from there to a tent pitched next to the future site of Marcus Garvey's Liberty Hall in Harlem, where the size of the congregation increased dramatically thanks to the preaching of Adam Clayton Powell, Sr., who had become the pastor in 1908. The church purchased property on the same street for a new sanctuary, paid for by tithes and offerings.

Dietrich Bonhoeffer, the future prominent German theologian, anti-Nazi activist and martyr, arrived in New York in 1930 - then a young student doing postgraduate study at the Union Theological Seminary. Frank Fisher, a black fellow-seminarian, introduced Bonhoeffer to the Abyssinian Church, where Bonhoeffer taught Sunday school and formed a lifelong love for African-American spirituals, a collection of which he took back to Germany. He heard Adam Clayton Powell Sr. preach the Gospel of Social Justice, and became sensitive to not only social injustices experienced by minorities but also the ineptitude of the church to bring about integration. It was there that Bonhoeffer began to see things "from below" — from the perspective of those who suffer oppression. He observed, "Here one can truly speak and hear about sin and grace and the love of God...the Black Christ is preached with rapturous passion and vision." Later Bonhoeffer referred to his impressions abroad as the point at which he "turned from phraseology to reality." - themes which were on Bonhoeffer's return to Germany manifested in his outspoken opposition to the Nazi regime and especially to its persecution of the Jews, and for which Bonhoeffer eventually paid with his life. 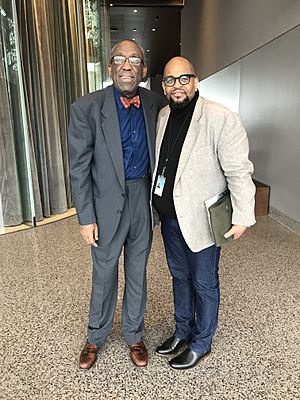 Bob Gore, Abyssinian Baptist Church Photographer on the left and Dr. Eric Williams, Curator of Religion National Museum Of African American History and Culture at NMAAHC in Washington, DC after a meeting at NMAAHC

By 1930, the church had 13,000 members, making it the largest African-American church in New York City, and the largest Baptist congregation in the world. Powell handed the reins of the church to his son Adam Clayton Powell, Jr. in 1937. Powell became the first black Congressman from New York City, and served 14 terms in the United States House of Representatives. Powell's "charisma, power, and notoriety", as well as his "spellbinding" preaching were the driving force behind the church's significant influence in the African American community at the time.

The funeral of David Baldwin, preacher and step-father of author James Baldwin, took place in the Abyssinian Baptist Church, during the wake of the 1943 Harlem riot. James Baldwin wrote of attending his father's funeral in his most famous essay, 1955's Notes of a Native Son.

The church was an important site for religious music during the Harlem Renaissance, and remains a center of the Harlem gospel tradition. Fats Waller played the organ at Abyssinian when his father, Edward Martin Waller, was a minister at the church. Among many important events, the church conducted the wedding of Nat King Cole and his bride Maria, and the funeral of "The Father of Blues", W.C. Handy, in 1958.

Adam Clayton Powell, Jr. was followed by Samuel DeWitt Proctor, and he by Calvin O. Butts. Under the direction of Butts, the church has continued to be a vital political, social, and religious institution in New York. In 1989 Butts founded the Abyssinian Development Corporation (ADC), creating a non-profit arm of the church to work on community development and social services. It has created $500 million in development, including the first new high school in Harlem in 50 years, the first large supermarket, a retail center, and housing.

In 1989, the church was one of the first to respond to Pernessa C. Seele's call for a Harlem Week of Prayer, started to mobilize the religious community in support of people with AIDS and their families. Seele has since founded Balm in Gilead, Inc., now an international non-profit providing education and prevention for HIV/AIDS, and developing other health initiatives in the United States, Africa and Caribbean.

All content from Kiddle encyclopedia articles (including the article images and facts) can be freely used under Attribution-ShareAlike license, unless stated otherwise. Cite this article:
Abyssinian Baptist Church Facts for Kids. Kiddle Encyclopedia.