Upendrakishore Ray Chowdhury (Bengali: উপেন্দ্রকিশোর রায়চৌধুরী), born Kamadaranjan Ray (কামদারঞ্জন রায়) (12 May 1863 – 20 December 1915), was a Bengali writer and painter. He was the son-in-law of Dwarkanath Ganguly. 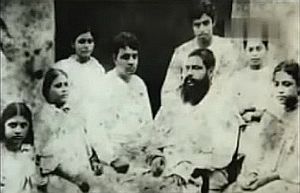 Ray with wife and six children.

Upendrakishore Ray Chowdhury was born on 12 May 1863, in a little village called Moshua in Mymensingh district of Bengal, (now Kishoreganj District in Bangladesh). He spent most of his adult life in Calcutta, where he died on 20 December 1915, aged only fifty-two.

He was born as Kamadaranjan Ray, to Kalinath Ray, a scholar in Sanskrit, Arabic, and Persian language. At the age of five, Kamadaranjan was adopted by Harikishore, a family-relative who was a zamindar in Mymensingh. Harikishore renamed his adopted son as Upendrakishore Roychowdhury, and added the honorific 'Raychaudhuri' as a surname.

Ray Chowdhury passed the Entrance examination in 1880 with scholarship from Mymensingh Zilla School. He studied for a while at Presidency College, then affiliated with the University of Calcutta, but passed BA examination in 1884 from the Calcutta Metropolitan Institution (now Vidyasagar College). Upendra took to drawing while in school. He published his first literary work in the magazine Sakha in 1883.

His father Kalinath Ray was an expert in both English and Persian, and also in the traditional Indian and Anglo-Indian legal systems. He became an eminent expert for interpreting old land deeds written in Persian and in helping the landowners to get the best deal from the newly introduced British legal system in India. He became affluent, and in due course his family was able to afford two elephants.

Upendrakishore first introduced modern blockmaking, including half-tone and colour block making, in South Asia. When the reproduction using woodcut line blocks of his illustrations for one of his books, Chheleder Ramayan, were very poor, he imported books, chemicals and equipment from Britain to learn the technology of blockmaking. After mastering this, in 1895 he successfully set up a business, U. Ray & Sons, of making blocks at 7, Shibnarain Lane, which then became his residence-cum-workplace. He experimented with the process of advanced blockmaking, and several of his technical articles about blockmaking were published in the Penrose Annual Volumes published from Britain. In his own lifetime, a printing expert from abroad commented that Upendrakishore's contribution was far more original than that of his counterparts in Europe and America, “which is all the more surprising when we consider how far he is from hub-centres of process work”. He also went on publishing books, but initially he had them printed in other printing presses. His residence and business was located at 22, Sukeas Street (now the premises has been renamed 30B, Mahendra Srimany Street) from 1901 to 1914. The Sandesh magazine was first published here in 1913 (Baisakh Bengali year 1320).

In 1914 he founded what was then probably the finest printing press in South Asia, U. Ray and Sons at 100 Garpar Road. Even the building plans were designed by him He quickly earned recognition in India and abroad for the new methods he developed for printing both black & white and colour photographs with great accuracy of detail. It was with the intention of running this business that his son Sukumar Ray spent a few years at the University of Manchester's printing technology department.

He experimented with the process of advanced blockmaking, and several of his technical articles about blockmaking were published in the Penrose Annual Volumes published from Britain. In his own lifetime, a printing expert from abroad commented that Upendrakishore's contribution was far more original than that of his counterparts in Europe and America, “which is all the more surprising when we consider how far he is from hub-centres of process work”.

He invented several techniques related to halftone blockmaking, of which the "screen-adjusting machine" for the automatic focussing of process cameras, was also assembled in England following his design. The British handbook of printing technology, the Penrose Annual, Volume X, 1904–05, mentioned about him in an editorial note that, "Mr. Ray is evidently possessed of a mathematical quality of mind and he has reasoned out for himself the problems of half-tone work in a remarkably successful manner ... (His printing developments) enable the operator to do uniform work with the fullest graduation and detail in it and with the minimum amount of manipulative skill in the negative-making and etching." The Penrose Annual Volume XI of 1905–06 published his paper about the new technique of 60-degree screens in halftone blockmaking. 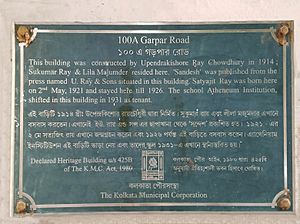 "Cheleder Ramayana" was the first book by Upendrakishore Roychowdhury. Upendrakishore embraced the liberal religious movement of Brahmo Samaj in 1883, after the death of his foster-father and he was a deeply religious man. But his scientific bent of mind is reflected in the numerous science articles he wrote for children. He published two remarkable books on popular science, which were classics in the Bengali language. "Sekaler Katha" described the geological history of Earth and the ancient animals like dinosaurs. Äakasher Katha" was an enthralling account of astronomy. His scientific interests were further nurtured by his close friendship to the scientists Jagadishchandra Bose and Prafullachandra Ray, all of whom lived and worked very close to each other. He also published a well known collection of children's stories called Tuntunir Boi.

Also a musician, Upendrakishore wrote two books about music in Bengali – Sohaj Behala Shikkha, about learning to play the violin, and Sikhak Batorike Harmonium, about learning to play the harmonium as an accompaniment to Indian music. These were published by Dwarkin & Son, which was a famous music firm of the times, established by Dwarkanath Ghose, the inventor of the hand-harmonium. (Upendrakishore coined the name for the firm in 1875).

Upendrakishore's eldest daughter, Shukhalata Rao, became a social worker, children's book author, and editor of a newspaper, Alok. She founded the Shishu-o-Matri Mangal Kendro (Centre for the Welfare of Children and Mothers) and the Orissa Nari Seva Sangha.

His eldest son was famous Sukumar Ray. His second daughter was Punyalata Chakraborty. His second son was Subinoy Ray and the youngest son Subimal Ray.

All content from Kiddle encyclopedia articles (including the article images and facts) can be freely used under Attribution-ShareAlike license, unless stated otherwise. Cite this article:
Upendrakishore Ray Chowdhury Facts for Kids. Kiddle Encyclopedia.