Uptown is a popular commercial district in southwestern Minneapolis, Minnesota, centered at the Uptown Theater (the former Lagoon) at the intersection of Hennepin Avenue and Lagoon Avenue. It has traditionally spanned the corners of four neighborhoods, Lowry Hill East, ECCO, CARAG and East Isles neighborhoods, within the Calhoun Isles community. Historically, the boundaries of Uptown are Lake Calhoun to the west, Dupont Avenue to the east, 31st Street to the south, and 28th Street to the north.

Uptown has proven to be a popular destination for those seeking retail, nightlife, and cultural events, and the district was famously written about by recording artist Prince.

The Lakes Area of Lake Calhoun. Lake Harriet, and Lake of the Isles became popular in the 1880s as vacation cottages, hotels, and boating recreation became available by streetcar. As Minneapolis expanded south, housing construction boomed through the 1920s. A commercial district began forming just east of the Lakes Area. At the intersection of Hennepin Avenue and Lagoon Avenue, the Lagoon Theatre was built, a multi-function vaudeville theater. When the Lagoon burnt down in 1939, owners sought to rebuild and the business community took the opportunity to rebrand the area. Following the success of Chicago's Uptown District, the Minneapolis Tribune announced the new Uptown District of Minneapolis centered on the newly renamed Uptown Theatre. 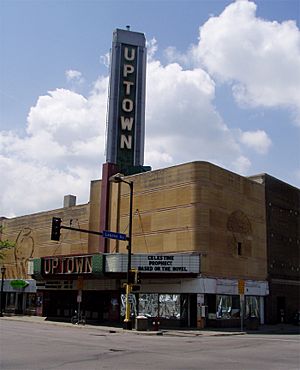 Through the 20th century, Uptown was primarily a family area centered on nearby West High School at Hennepin and 28th Street West. Modest housing along Lowry Hill met the mansions of Kenwood to the west and around the lakes. Hennepin flourished as a commercial corridor and route from downtown to residential homes, while Uptown served also as an important streetcar route from Uptown to the vacation homes of Lake Minnetonka. White flight via the freeway system after World War II and demolition of West High School signaled a demographic shift in the area. Blight and crime began moving into Lowry Hill though were kept at bay by the Kenwood area. Neighborhood associations and formal borders were designated in the 1970s as each section of Uptown began addressing domestic problems. 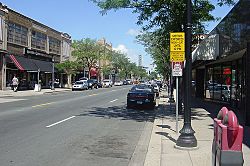 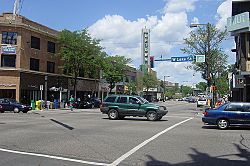 .. and a block north at West Lake Street.

During this time, Uptown developed an artist culture. The history of this culture is preserved in the annual Uptown Art Fair. In 1980, Minneapolis musician Prince, a graduate of Central High School, released his seminal recording Dirty Mind, which contained his paean to these artists, appropriately titled "Uptown". In the 1990s he later owned a store at 1408 West Lake Street called New Power Generation. A retail renaissance of the area occurred in the 1980s when Calhoun Square was developed. Combining a half block of existing storefront buildings, the renovation turned the area into a competitive retail draw from Downtown and from the suburban dales (malls). As the popularity of Uptown as a residential district grew again, the definition of the area expanded.

The Lake Street Council launched a Museum In the Streets project, a series of free, self-guided walking tours highlighting business districts along Lake Street, including Uptown. The Uptown Tour spotlights historic businesses and places in the neighborhood, including the origins of Abdallah Candies, Schatzlein Saddle Shop, Schlampp & Sons Furriers, and the Uptown Theater.

Uptown is a mix of various cultural strains and is considered an area for young people to live and shop. It was formerly known as a vibrant center for artists and musicians, a center for Counterculture, and hippies, similar to East Village, Manhattan. The artist community was popularized by the musician Prince, who started his career in Uptown. The area has suffered greatly from gentrification, and is no longer the bohemian area it once was. Many of the older buildings and long-standing businesses in the area have closed or been torn down due to gentrification.

Much more numerous now, are the young professionals, also known as yuppies and recent college graduates from throughout the Twin Cities and midwestern area who frequent this district at night, especially on the weekends, in order to visit local restaurants and bars.

Uptown's more than 20 bars within a three-block radius draw people from across the metro area to revel in the district. Uptown seems to draw a "slightly older and 'more sophisticated'" clientele compared to the Warehouse District. There has been some controversy about noise, particularly surrounding bar's rooftop patios. In 2011 City Council Member Meg Tuthill wrote a noise ordinance to address the issue, but it was afterwards withdrawn.

Uptown annually hosts the Uptown Art Fair, during the first full weekend of August. Local, national, and world artists converge to exhibit and sell their fine art. Art media include paintings, sculptures, clothing, pottery, jewelry, glass, and mixed media. Art cost ranges from $6 (USD), for prints, and up into the hundreds or thousands of USD for paintings. The Art Fair SourceBook has rated the Uptown Art Fair highly in past years for fine art festivals.

Uptown hosts an annual stage of the North Star Grand Prix, one of the most important bicycle races in the country. This began on June 12, 2009, and occurs every year in mid-June.. The Uptown race is a criterium, a spectator-friendly race on a short circuit that allows spectators to watch the entire race from start to finish, with the racers passing by every minute or so. The event was volunteer-run with all proceeds donated to Special Olympics Minnesota.

The Uptown Transit Station is located on Hennepin Avenue over the 29th Street Greenway and serves Metro Transit buses 6, 12, 17, 21, 23, 53, 114 and 115. The station also has a change machine, a heated interior, binoculars, bike lockers and posts, and a workers lounge and office area. The Midtown Greenway, a former railway cutting which now hosts a bike path, bisects Uptown roughly a block north of Lake Street (where 29th Street would otherwise have been located). To improve the ease of transportation in a community that is currently pedestrian heavy, Hennepin County is considering the addition of a streetcar in the Greenway.

All content from Kiddle encyclopedia articles (including the article images and facts) can be freely used under Attribution-ShareAlike license, unless stated otherwise. Cite this article:
Uptown, Minneapolis Facts for Kids. Kiddle Encyclopedia.