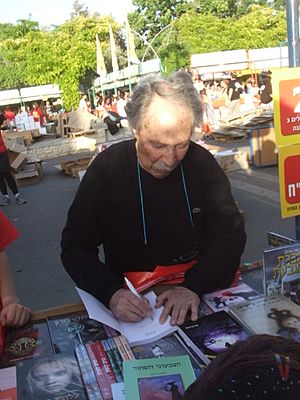 Uri Orlev, born Jerzy Henryk Orlowski, was born in Warsaw, Poland, the son of a physician. During World War II he lived in the Warsaw Ghetto until his mother was killed by the Nazis, and he was then sent to Bergen-Belsen concentration camp. After the war he moved to Israel. He began writing children's literature in 1976 and has since published over 30 books, which are often biographical. His books have been translated from Hebrew into 36 languages. Orlev has also translated Polish literature into Hebrew. Uri Orlev was later interviewed in the documentary film "Life is Strange" not only on his book, but also on his life before World War II.

Orlev is married with two sons, a daughter, and four grandchildren. One of his sons, Itamar Orlev, is also a writer and made his debut with the novel Bandit in 2015.

The biennial Hans Christian Andersen Award conferred by the International Board on Books for Young People is the highest recognition available to a writer or illustrator of children's books. Orlev received the writing award in 1996. The jury stated:

Uri Orlev's experience as a Jewish boy in war-torn Poland is the background of this outstanding writer for children. Whether his stories are set in the Warsaw ghetto or his new country Israel, he never loses the perspective of the child he was. He writes at a high literary level, with integrity and humor, in a way which is never sentimental, exhibiting the skill to say much in few words. Uri Orlev shows how children can survive without bitterness in harsh and terrible times.

In 1972, he received the Prime Minister's Prize for Hebrew Literary Works. In 2006, he was awarded the Bialik Prize for literature (jointly with Ruth Almog and Raquel Chalfi).

In the U.S., four books by Orlev have won the Batchelder Award in English-language translations by Hillel Halkin published by Houghton Mifflin. The annual American Library Association award recognizes the "children's book considered to be the most outstanding of those books originally published in a foreign language in a foreign country, and subsequently translated into English and published in the United States". The four American titles were The Island on Bird Street, The Man from the Other Side, The Lady with the Hat, and Run, Boy, Run, published from 1984 to 2003 by Houghton Mifflin, eventually by its Walter Lorraine Books imprint.

All content from Kiddle encyclopedia articles (including the article images and facts) can be freely used under Attribution-ShareAlike license, unless stated otherwise. Cite this article:
Uri Orlev Facts for Kids. Kiddle Encyclopedia.