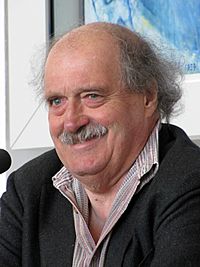 Urs Widmer (21 May 1938 – 2 April 2014) was a Swiss novelist, playwright, essayist and short story writer. He wrote for several different newspapers and other publications. He was best known for his 2000 book Der Geliebte der Mutter (The Mother's Lover). In 2013, he won the Friedrich Hölderlin Prize. He was born in Basel.

All content from Kiddle encyclopedia articles (including the article images and facts) can be freely used under Attribution-ShareAlike license, unless stated otherwise. Cite this article:
Urs Widmer Facts for Kids. Kiddle Encyclopedia.