Véronique Tadjo (born 1955) is a writer, poet, novelist, and artist from Côte d'Ivoire. Having lived and worked in many countries within the African continent and diaspora, she feels herself to be pan-African, in a way that is reflected in the subject matter, imagery and allusions of her work. 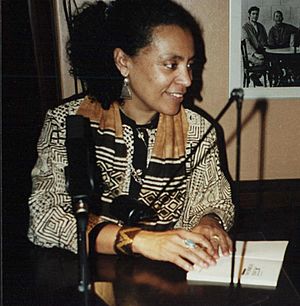 Véronique Tadjo during a public reading in Frankfurt/Main, 2001.

Born in Paris, Véronique Tadjo is the daughter of an Ivorian civil servant and a French painter and sculptor. Brought up in Abidjan, she travelled widely with her family.

Tadjo completed her BA degree at the University of Abidjan and her doctorate at the Sorbonne in African-American Literature and Civilization. In 1983, she went to Howard University in Washington, D.C., on a Fulbright research scholarship.

In 1979, Tadjo chose to teach English at the Lycée Moderne de Korhogo (secondary school) in the North of Côte d'Ivoire. She subsequently became a lecturer in the English department at the University of Abidjan until 1993.

In 1998, she participated in the project "Rwanda: Ecrire par devoir de mémoire" (Rwanda: Writing for the sake of memory) with a group of African writers who traveled to Rwanda to testify to the Rwandan genocide and its aftermath. Her book L'Ombre d'Imana emerged from her time in Rwanda.

In the past few years, she has facilitated workshops in writing and illustrating children's books in Mali, Benin, Chad, Haiti, Mauritius, French Guiana, Burundi, Rwanda, the United States, and South Africa. In 2006 she participated in the fall residency of the International Writing Program at the University of Iowa.

Tadjo has lived in Paris, Lagos, Mexico City, Nairobi and London. She was based in Johannesburg after 2007 as head of French Studies at the University of the Witwatersrand.

Tadjo received the Literary Prize of L'Agence de Cooperation Culturelle et Technique in 1983 and the UNICEF Prize in 1993 for Mamy Wata and the Monster, which was also chosen as one of Africa's 100 Best Books of the 20th Century, one of only four children's books selected. In 2005, Tadjo won the Grand prix littéraire d'Afrique noire and in 2016 the Bernard Dadié national grand prize for literature

All content from Kiddle encyclopedia articles (including the article images and facts) can be freely used under Attribution-ShareAlike license, unless stated otherwise. Cite this article:
Véronique Tadjo Facts for Kids. Kiddle Encyclopedia.