The Vale Castle, in located in the Vale, Guernsey. It is a protected building. The original name was ‘’Le Chateau St Michel’’, later it became ‘’Chateau de Val’’ or ‘’Chateau de Valle’’ and is over 1,000 years old. It defends both St Sampson’s harbor at the eastern end of the Braye du Valle, Guernsey and Bordeaux Harbour. 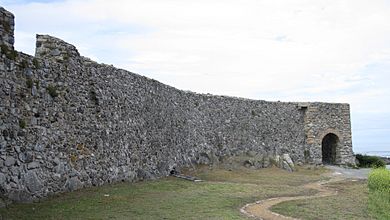 The north of Guernsey was separated from the rest of Guernsey by a tidal passage. Earthworks dating from 500 to 600 BC, comprising a double ditch and bank indicate that an iron age fort existed on the hill that forms the location of the Vale Castle.

Around A.D. 968, monks, from the Benedictine monastery of Mont Saint-Michel, came to Guernsey to establish the Abbey of St Michael, a community in the North of the Island.

According to tradition, Robert II, Duke of Normandy (the father of William the Conqueror) was journeying to England in 1032, to help Edward the Confessor. He was obliged to take shelter in Guernsey and gave land, now known as the Clos du Valle, to the monks

Furthermore, in 1061, when pirates attacked and pillaged the Island, a complaint was made to Duke William. He sent over Sampson D'Anneville, who succeeded, with the aid of the monks, in driving the pirates out. For this service, Sampson D' Anneville and the monks were rewarded with a grant of half the Island between them. The portion going to the monastery being known as Le Fief St Michel included the land where the castle is located. The castle of Saint Michael or as it is now called "Vale Castle" was constructed to protect the population against pirates by providing a safe refuge.

It is not possible to identify when the medieval works were started, possibly in the late 10th-century, with the design to provide a safe haven for the population from ravages of pirate, however during the English Channel naval campaign (1338–1339), the island and then the castle were captured by French controlled forces and the defenders were put to death. The occupying forces withdrew in 1340 after the French navy was crippled at the Battle of Sluys.

In 1372 Owain Lawgoch a claimant to the Welsh throne, at the head of a free company, on behalf of France, attacked Guernsey. The assault was popularly called “La Descente des Aragousais”. Owain Lawgoch withdrew after killing 400 of the Island militia, The poem of the same name refers to the castle as the Château de l'Archange, the location of the last ditch stand against the insurgents. 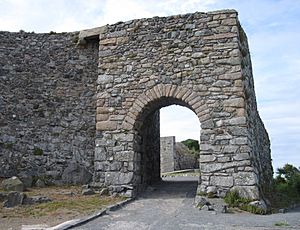 Granite curtain walls and a gatehouse were added in the 15th century, with other repairs and improvements to walls and installing buttresses being made over the next century. A powder house, guardroom and houses for the garrison were added around this time. The castle has a well. In 1615 it was the requirement of the island to maintain the Vale castle, as against the Crown which maintained Castle Cornet.

The American Revolutionary War which made France an enemy resulted in barracks and other improvements being added in the late 18th century. The French Revolution was also a threat to the island and one 24pdr cannon and two 9pdr cannons were installed.

The Castle was fitted with a signal mast to alert the island to the approach of any vessel, with a fire beacon to give alarm at night.

In 1799, 6,000 Russian troops were quartered at nearby Delancey. Hundreds died of disease and graves of Russian soldiers are located at the Vale Castle. 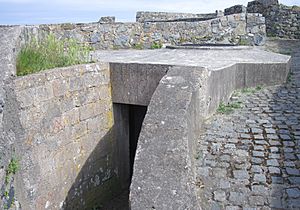 During the Napoleonic Wars the reclaiming of Braye du Valle in 1806-8 saw the end of the separation of Le Clos du Valle, previously a tidal island, which improved the ability to move troops and better protect the island. The nearby port of St Sampson was expanded with additional trade through the harbor.

During World War I the local militia had a small garrison in the castle and between the wars the barracks were used by the States as homes.

The Castle is of irregular plan on a hill; roughly built with six rounded towers connected with curtain walls and a square gatehouse.

The coast is on the south and east and to the west was low lying marsh.

Under the medieval outer bank was a small turf bank which contained pottery dating to 500-600 BC with similar pottery found in a second bank under the 14th Century military buildings inside the walls. This hillfort, with its double-bank is unique in Guernsey.

Large excavations took place in 1980. These indicated that the original construction date for the late medieval works was around 1370-1400.

The whole of the Chateau de Marais was listed as a Protected Monument on 26 March 1938, reference PM124.

The Vale Castle is open to the public, accessible on foot, free of charge except on days when private events are staged. Free parking is available at Bordeaux or off Castle Road.

The castle is becoming popular for music festivals and private parties. The Vale Earth Fair has been held in the Castle for over 40 years.

The public can walk through the German era trenches and view Tobruk pits, MG positions and a personnel shelter.

All content from Kiddle encyclopedia articles (including the article images and facts) can be freely used under Attribution-ShareAlike license, unless stated otherwise. Cite this article:
Vale Castle, Guernsey Facts for Kids. Kiddle Encyclopedia.