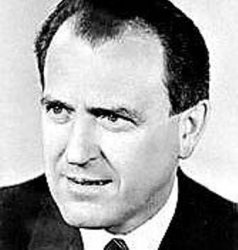 Vasil Biľak in an undated photo.

He was born in Krajná Bystrá, Austria-Hungary. His family were Rusyns. He first worked as a tailor and then became a politician. First, from 1955 until 1971, he was a member of the Central Committee of the Communist Party of Slovakia (ÚV KSS). Biľak was, from November 1968 until December 1988, a secretary of ÚV KSČ with important impact on the foreign policy of the party. From 1960 until 1989, he was a part of the National Assembly, later the Federal Assembly.

All content from Kiddle encyclopedia articles (including the article images and facts) can be freely used under Attribution-ShareAlike license, unless stated otherwise. Cite this article:
Vasiľ Biľak Facts for Kids. Kiddle Encyclopedia.