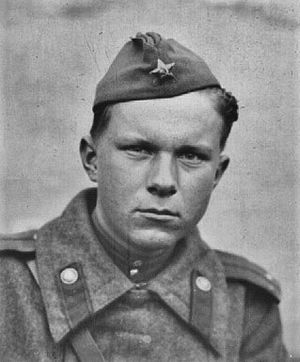 Vasil Uładzimiravič Bykaŭ (June 19, 1924 - June 22, 2003) was an author of many novels and novellas about World War II. He is a big figure in Belarusian literature and civic thought. The writer's talent earned him endorsements for the Nobel Prize nomination from, among others, Nobel Prize laureates Joseph Brodsky and Czesław Miłosz.

Vasil Bykaŭ was born in the village Byčki, not far from Viciebsk in 1924. In 1941 he was in Ukraine when Germany attacked the USSR. He volunteered for the Red Army. For years after the war he continued to serve. He returned to the USSR only in the mid-1950s. There he started to work as a journalist for the Hrodna Pravda newspaper. In that same decade his first novellas were published.

Bykaŭ was one of the most admired writers in the Soviet Union. In 1980 he was awarded the title of People's Writer of the Belarusian SSR. Vasil Bykaŭ is the most widely read Belarusian writer outside of Belarus.

All content from Kiddle encyclopedia articles (including the article images and facts) can be freely used under Attribution-ShareAlike license, unless stated otherwise. Cite this article:
Vasil Bykaŭ Facts for Kids. Kiddle Encyclopedia.