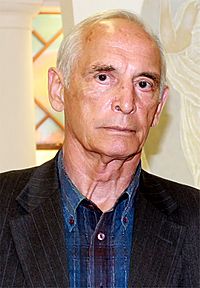 Vasily Semyonovich Lanovoy (Russian: Василий Семёнович Лановой; 16 January 1934 — 28 January 2021) was a Russian actor. He worked in the Vakhtangov Theatre, Moscow. He was also known as the President of Artek Festival of Films for Children.

Lanovoy's honours included the KGB Prize, the Lenin Prize, and the title of People's Artist of the USSR. In 2019, he received the title Hero of Labour of the Russian Federation.

All content from Kiddle encyclopedia articles (including the article images and facts) can be freely used under Attribution-ShareAlike license, unless stated otherwise. Cite this article:
Vasily Lanovoy Facts for Kids. Kiddle Encyclopedia.