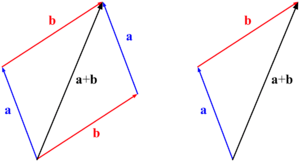 Adding vectors (right side): vector a (blue) is added to vector b (red) by placing them as shown on the right. The sum, a+b, is black. Left side: the sum of two vectors makes the diagonal of a parallelogram.

More formally, a vector space is a special combination of a group and a field. The elements of the group are called vectors, and the elements of the field are called scalars. Vector spaces are important in an area of mathematics called linear algebra, an area which deals with linear functions (functions of straight lines, not curves).

A vector can be represented graphically with an arrow that has a tail and a head. To add two vectors, you place one the end of one vector at the head of the other one (see figure). The sum is the vector that goes from the tail of the first vector, to the head of the second.

The "vectors" don't have to be vectors in the sense of things that have magnitude and direction. For example, they could be functions, matrices or simply numbers. If they obey the axioms of a vector space (a list of properties a vector space needs to satisfy), you can think of them as vectors and the theorems of linear algebra will still apply to them.

All content from Kiddle encyclopedia articles (including the article images and facts) can be freely used under Attribution-ShareAlike license, unless stated otherwise. Cite this article:
Vector space Facts for Kids. Kiddle Encyclopedia.